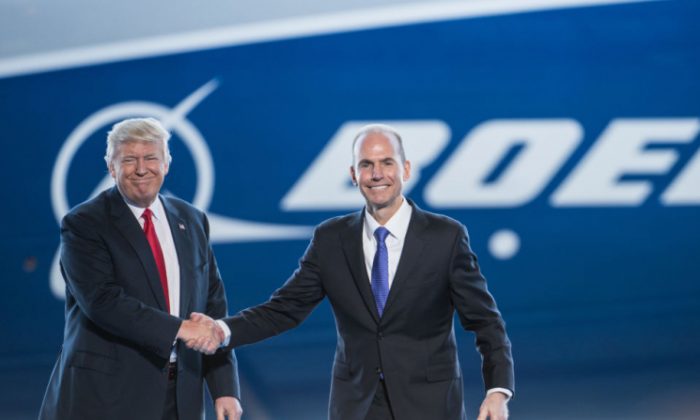 President Donald Trump struck a deal with Boeing for a pair of new Air Force One jets, saving taxpayers over $1.4 billion, the White House announced on Feb. 27.

“President Trump has reached an informal deal with Boeing on a fixed price contract for the new Air Force One Program,” Deputy Press Secretary Hogan Gidley told Fox News. “Thanks to the president’s negotiations, the contract will save the taxpayers more than $1.4 billion.”

Trump met with Boeing CEO Dennis Muilenburg at the White House on Feb. 20 to resolve a complex negotiation between the Air Force and Boeing, according to three sources who spoke to Defense One.

Trump and Muilenburg locked in a $3.9 billion deal for extensive modifications to a pair of 747-8 aircraft which include conference rooms, a presidential office, and a military communications suite that would allow Trump to remain in control while in transit and, if necessary, launch nuclear weapons.

“Boeing is proud to build the next generation of Air Force One, providing American Presidents with a flying White House at outstanding value to taxpayers,” Boeing said in a statement, according to Fox News. “President Trump negotiated a good deal on behalf of the American people.”

Trump thrust the Air Force One deal into the national spotlight before he was inaugurated, tweeting that the proposed costs “are out of control.”

Trump met with the Boeing CEO several times since that tweet. The president visited a Boeing factory in South Carolina in February last year.

Trump also reportedly saved the taxpayers money when the Air Force purchased the pair of to-be-converted planes from Boeing in August last year. The amount Trump saved is unknown, though it was enough for Boeing to block the Air Force from disclosing the price since the planes are still sold on the commercial market.

Air Force One is the air-traffic-control callsign for any aircraft that carries the president. The idea to designate a military plane to carry the president came about in 1943 when officials became concerned about transporting the president on a commercial airline.

The current presidential jets are modified Boeing 747-200s officially called VC-25. Compared to its unmodified version, the presidential aircraft has a self-contained baggage loader, front and aft air-stairs and the capability for in-flight fueling, according to the Air Force.