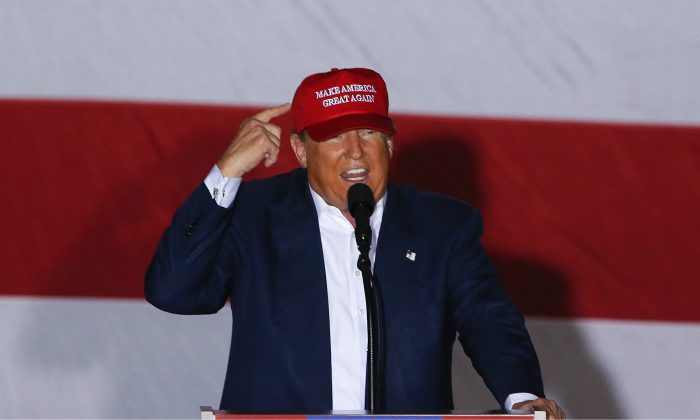 Donald Trump says he may pay the legal fees for a 78-year-old supporter who was arrested after sucker-punching a black protester.

The incident took place at a Trump rally in Fayetteville, North Carolina on March 9.

“I’ve actually instructed my people to look into it, yes,” Trump said on NBC on Sunday’s Meet the Press. “He obviously loves his country.”

During a tour of the morning shows, Trump disputed claims he was fueling violence at his rallies, some of which his team has been forced to cancel recently due to security concerns.

Our people started swinging back, and the next day we are the bad guys.
— Donald Trump

Trump said his supporters were “not the bad guys,” but were just defending themselves against the “mean” protesters, reported Fox News.

“[The protesters] are so bad,” he said at an outdoor rally in Bloomington, Ohio. “Our people started swinging back, and the next day we are the bad guys.”

On NBC, host Chuck Todd played an audio clip of Trump saying several weeks ago that in “the old days” protesters wouldn’t just be escorted out, but “carried out on a stretcher.”

“I’d like to punch him in the face, I’ll tell you that,” Trump added at the time.

Todd then noted that the older Trump supporter John McGraw did punch protester Rakeem Jones, 26, at the Crown Coliseum and wondered if Trump took responsibility for what happened.

“I don’t accept responsibility. I do not condone violence in any shape,” Trump replied.

“And I will tell you from what I saw, the young man stuck his finger up in the air, and the other man sort of just had it.”

Trump then alleged that the “disruptors” have all been Bernie Sanders supporters.

Trump then alleged that the “disruptors” have all been Bernie Sanders supporters. Several have been confirmed to be supporters of the Democratic candidate, such as the former child actor who rushed the stage at a rally in Ohio over the weekend.

“They’re professionals,” Trump said on NBC. “Be careful Bernie, or my supporters will go to yours!” he added on Twitter.

When Todd noted another thing Trump said, at a rally in Iowa earlier this year, to “just knock the hell” out of anyone disruptive in the audience who was trying to throw a tomato at Trump, he wondered how it was not condoning violence.

“I have no objection to what I said. I would say it again. People are there doing harm, you have to go and you have to use equal force,” Trump said.

At the time, he added: “I promise you, I’ll pay for their legal fees.”