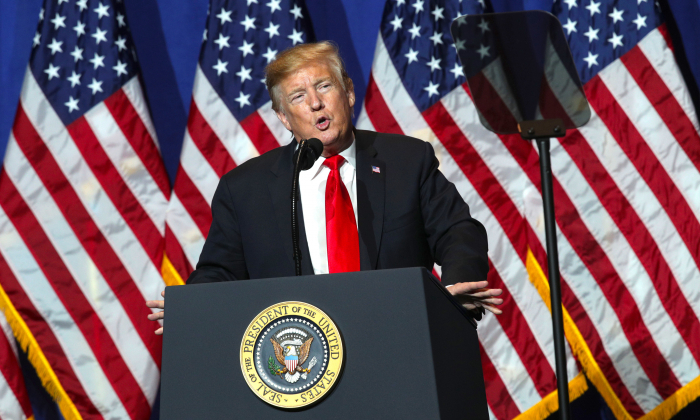 “As most people know, and for those who would like to know, I am strongly Pro-Life, with the three exceptions—Rape, Incest and protecting the Life of the mother—the same position taken by Ronald Reagan,” Trump wrote on Twitter on May 18.

While Trump has spoken about abortion and his support of the pro-life movement, he has not addressed the specifics of his position on abortion laws since before the 2016 election. Prior to his statement on May 18, the president’s most recent remarks on the rape and incest caveats appear to date back to January 2015.

While the pure pro-life position is that human life begins at conception and should be protected, the movement generally supports measures that include exceptions for rape and incest. While advancing the pro-life cause, such partial measures can’t be used to legally challenge the core holding of Roe v. Wade, the Supreme Court ruling which recognized abortion as a woman’s legal right.

The new Alabama law stands out among the recent measures restricting abortion because it doesn’t include exceptions for rape and incest, uniquely positioning it for a nuclear challenge to Roe v. Wade.

Trump had changed his position from pro-choice to pro-life by 2011, when he revealed his new stance to attendees at the Conservative Political Action Conference. Since becoming president, he has delivered on a promise to appoint conservative justices to the Supreme Court and lower courts.

The Senate confirmed two of Trump’s nominees for the Supreme Court, Justices Neil Gorsuch and Brett Kavanaugh, shifting the court to a solid conservative majority.

Emboldened by the new conservative majority, Republicans across the nation moved to pass restrictions on abortion, most notably a series of “heartbeat bills” which ban abortion once the beat of a pre-born child’s heart is detected. Kentucky, Mississippi, Ohio, and Georgia have enacted such laws. A measure in Missouri is expected to follow.

In follow-up messages on May 18, Trump suggested that the recent gains may be lost if Democrats take over the White House in 2020.

“We have come very far in the last two years with 105 wonderful new Federal Judges (many more to come), two great new Supreme Court Justices, the Mexico City Policy, and a whole new & positive attitude about the Right to Life,” the president wrote on Twitter.

“The Radical Left, with late-term abortion (and worse), is imploding on this issue,” he added. “We must stick together and Win for Life in 2020. If we are foolish and do not stay UNITED as one, all of our hard fought gains for Life can, and will, rapidly disappear!”

The president’s mention of practices that are “worse” than “late-term abortion” is likely a reference to Virginia Gov. Ralph Northam’s defense of infanticide as a decision a mother can make in concert with doctors.

Earlier this year, Democrats in the Senate blocked a bill that would require doctors to afford the same care to children who survive abortions as they do to children who are born normally. Democrats refused to bring a similar measure up for a vote in the House.