Trump Speaks to Gen Z, Millennials: We Believe in Free Speech, Even If Politically Incorrect

President Donald Trump highlighted the values of free speech while speaking to about 100 student leaders, NASA interns, and others during a “Face-to-Face With Our Future” event in the White House on June 27.

“Each of you represents the future of this nation,” he said. “You aren’t afraid to speak the truth, and the truth as you know it, and to stand up for what you know is right, even if it means being politically incorrect on occasion.”

In a jest, he pointed to himself as an example.

Suppression of free speech and the stifling effect of political correctness have become a hot topic at universities across the nation after a slew of incidents last year in which students, professors, and invited speakers were shut down by sometimes violent crowds of protesters.

While most of the targets were conservatives, like commentators Ben Shapiro and Heather Mac Donald, some who considered themselves liberal expressed dismay at being attacked for crossing, even unwittingly, the shifting bounds of political correctness.

One such example was Evergreen State College biology professor Bret Weinstein, who was forced by protesters to quit after he spoke out against an event he considered racist. The event asked all white people to leave campus for a day. He sued and received a $500,000 settlement from the school.

“We believe in free speech on college campuses, not censorship,” Trump told the crowd in the South Court Auditorium. “Institutions of higher learning should be forums for open discussion either way. You can be liberal, you can be conservative, you can be Democrats, Republicans. Hear it all out—and you make your choice.

“You may not agree with me on things. Some people don’t; some people do. But you have to have free speech.” 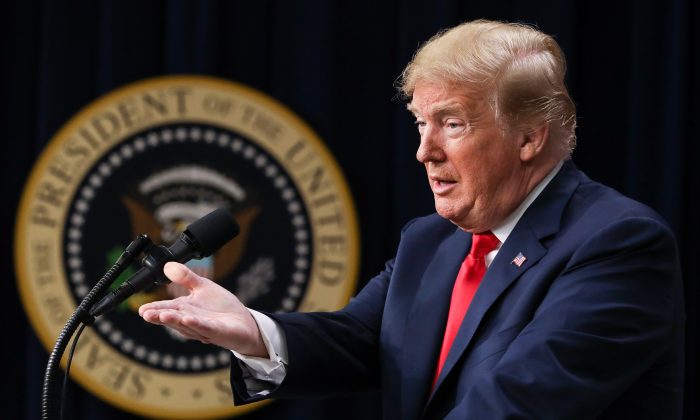