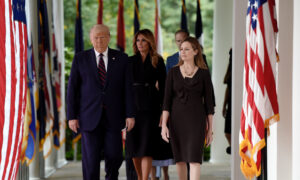 In Atlanta, Georgia, President Donald Trump spoke to black Americans on what they can expect if he were to serve another term. Trump also talked about both parties’ relationship with the black community in the past.

The president said his administration built the greatest economy for African Americans in U.S. history, adding that the poverty rate in black America reached the lowest level ever recorded and had the largest job gains on record.