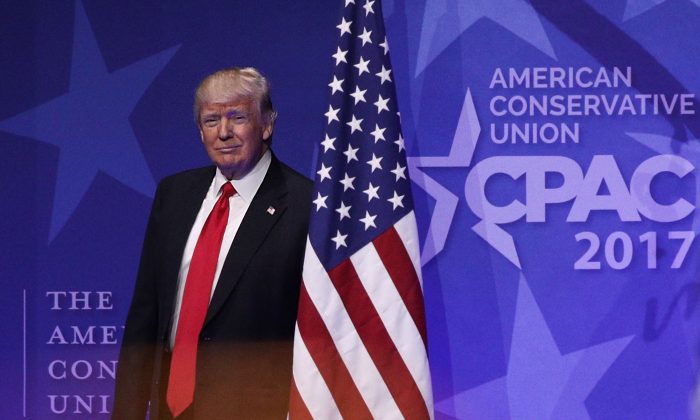 President Donald Trump walks on stage prior to his address to the Conservative Political Action Conference at the Gaylord National Resort and Convention Center in National Harbor, Maryland on Feb. 24, 2017. Hosted by the American Conservative Union, CPAC is an annual gathering of right wing politicians, commentators and their supporters. (Alex Wong/Getty Images)
Politics

President Donald Trump was in friendly company when he spoke at the Conservative Political Action Conference (CPAC) on Feb. 24.

True to form, he began with a poke at the media, saying they probably wouldn’t report the standing ovation he received upon arrival.

He also spoke about his uphill battle for the presidency, the “mess” he inherited, the promises he’d fulfilled, and his plans going forward.

He referenced the first political speech he gave at the same conference six years ago when he decided to get into politics, and the winding path that led to his presidency.

“All of these years we’ve been together, and now you finally have a president,” he said. “Took you a long time. And it’s patriots like you that made it happen.”

Trump lamented the $6 trillion the United States has spent on the Middle East while neglecting infrastructure at home, while emphasizing a more nationalist agenda.

He talked about Obamacare, saying he plans to make it “less expensive, we’re going to make it much better,” about the $20 trillion national debt he inherited, and a foreign policy “marked by one disaster after another.”

“If our presidents would have gone to the beach for 15 years, we would be in much better shape than we are right now,” he said. “We don’t win anymore. When was the last time we won? Did we win a war? Did we win anything?” he said.

Trump went on to define the “movement” that has started, his “America first” message, and what it means going forward.

“The core conviction of our movement is that we are a nation that will put its own citizens first,” he said. “For too long we’ve traded away our jobs to other countries. We’ve defended other nations’ borders while leaving ours wide open.”

He said his plans to build the wall at the southern border, a core campaign promise, is “way ahead of schedule” and commended Homeland Security Secretary Gen. John Kelly’s moves to deport criminals who are illegally residing in the country.

“Fantastic, the job he’s done. And remember, we are getting the bad ones out,” he said. “They’re the ones that go first. I said it from day one. Basically all I’ve done is keep my promise.”

Trump reiterated his commitment to the American people, saying, “I’m here fighting for you, and I will continue to fight for you.”