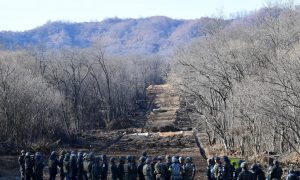 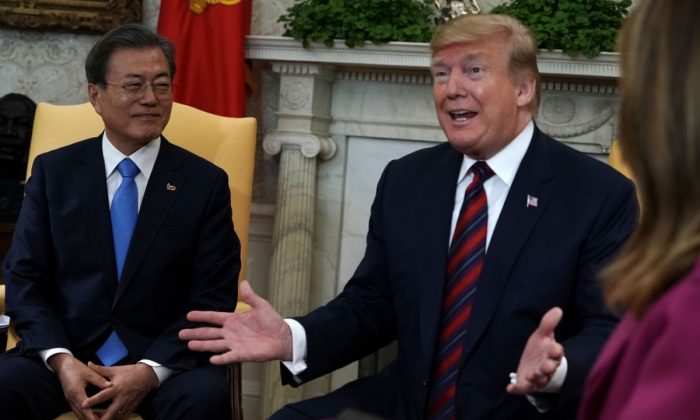 Trump: South Korea Will Pay US More Money to Defend Itself From North Korea

President Donald Trump said on Aug. 7 that South Korea is willing to pay the United States “substantially more” than it previously did for defending the nation from the nuclear-armed North Korea.

“South Korea has agreed to pay substantially more money to the United States in order to defend itself from North Korea,” Trump wrote on Twitter Wednesday.

“Over the past many decades, the U.S. has been paid very little by South Korea, but last year, at the request of President Trump, South Korea paid $990,000,000,” Trump added.

The President said South Korea is a “very wealthy nation” that has agreed to contribute more to what the United States spends on the region’s defense.

South Korea has agreed to pay substantially more money to the United States in order to defend itself from North Korea. Over the past many decades, the U.S. has been paid very little by South Korea, but last year, at the request of President Trump, South Korea paid $990,000,000..

…Talks have begun to further increase payments to the United States. South Korea is a very wealthy nation that now feels an obligation to contribute to the military defense provided by the United States of America. The relationship between the two countries is a very good one!

“Talks have begun to further increase payments to the United States. South Korea is a very wealthy nation that now feels an obligation to contribute to the military defense provided by the United States of America,” Trump added in a second Twitter post.

“The relationship between the two countries is a very good one!” the president wrote.

The South Korean Embassy in Washington did not immediately respond to The Epoch Times’ request for comment.

Currently, the forces of the United States and South Korea are joined in a structure called the Combined Forces Command, which formed in 1978.

In peacetime, South Korean forces are under its national control, however, in times of war, the South Korean forces are led by a U.S. General. Peacetime requires a lot of coordination between the two forces, says Kanishkan Sathasivam, an expert on North Korea’s Nuclear Weapons and a professor of International Relations at Salem State University in Massachusetts.

The presence of the United States forces in the Korean peninsula began during the Korean war, after communist North Korea invaded South Korea in 1950.

“That war ended in an armistice, which is a sort of very long term ceasefire without an official end to hostilities. So ever since then, we have kept to an obligation to continue to defend South Korea against a possible resurgence of hostilities with the North,” Sathasivam told The Epoch Times in an email on Aug. 7.

South Korea began paying the United States for the “indirect costs” of the U.S. Army stationed on its land in 1991, according to the Los Angeles Times. These payments increased to $800 million in 2014.

“These costs include such things as infrastructure (operating and maintaining buildings for example) and logistics (operating costs such as fuel, food, utilities, etc.). But they don’t pay for the costs of our own military equipment or personnel,” Sathasivam said in an email.

Sathasivam said that currently there is no clear cut “timetable” as to when control of South Korean forces will be fully transferred to South Korea.

Sathasivam explained that Trump wants “to cut back on US military commitments worldwide, wants to eventually come to some agreement on a withdrawal of US forces from SK and leaving it to the South Koreans to defend themselves.”

“They should easily be able to defend themselves against the North. So the view that some in the US hold, which is that SK is free-riding off the US so that they can keep their defense expenditures low and focus their resources on their domestic economic and social priorities at US expense, has some validity,” he said.

Bruce Bennett, a Senior Defense Analyst with The RAND Corporation, told The Epoch Times in an email Aug. 7 that South Korea has existing plans for increased contributions to the military alliance.

“To strengthen the ROK contribution to the US/ROK alliance, President Moon has committed to increasing the Ministry of National Defense’s (MND’s) budget during his presidency at a far faster rate than either of his conservative predecessors,” said Bennett.

“So when President Trump asks for a burden-sharing increase of several $billion, we must first recognize that the National Assembly is already increasing the MND budget as rapidly as it likely can,” Bennett added.

He said politically it would be tough for President Moon because he would not be able to get the National Assembly to pay extra for increased burden-sharing and would come from a reduction in other things already planned.

“MND could certainly reduce this budget by purchasing fewer F-35 aircraft or fewer PAC-3 missile defense interceptors, but that would hurt US businesses and likely lead to lost jobs in the United States,” said Bennett via email.

He said that U.S. forces stationed in South Korea help stabilize the region and support the interests of the United States.

“The US has been willing to not have Korea pay for US personnel like mercenaries because of this shared interest.  Both of our countries need to make every effort to describe our alliance as something that is in both of our interests, and therefore requires sacrifices on both of our parts—the people of both the ROK and the United States need to better understand this,” he said.