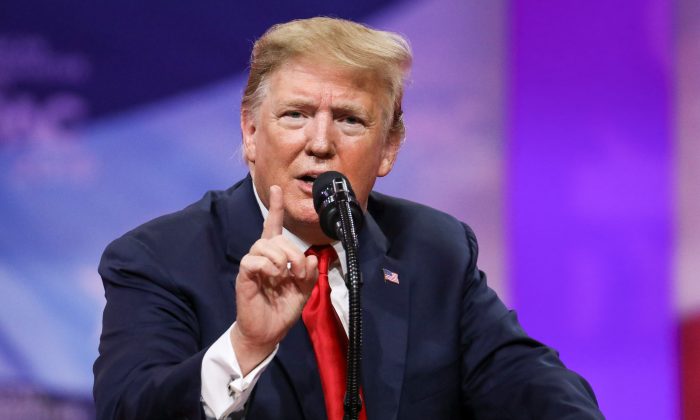 Trump: Socialist Promises ‘Seductive,’ but Would Send Country ‘Down the Tubes’

President Donald Trump warned about the enticing promises of socialist policies like “free” health care and college, predicting such a course would ruin the country.

He acknowledged that making such promises is attractive for politicians, but contested the idea that socialism is on the rise in America.

“You always have to be very careful, because socialism is easy to campaign on but tough to govern on, because the country goes down the tubes,” Trump told Breitbart in a March 11 interview.

“When you tell people free medical, free education, no more student loans—all of the different things that you say—it’s a great thing to campaign on, but then ten years later the country is down the tubes. It’s gone.”

Sanders’ single-payer proposal came with major tax hikes (pdf) of more than $15 trillion over 10 years, but still nowhere near the $32 trillion price tag of the plan, based on the Urban Institute’s estimate (pdf).

Canceling student debt would cost about $1.5 trillion and free public college for all would add another $750 billion cost over 10 years, The Wall Street Journal estimated in 2015.

The “Green New Deal” is likely the most extreme example of recent socialist policy proposals.  It came from Rep. Alexandria Ocasio-Cortez (D-N.Y.), or more specifically, from the democratic socialist activists who ran her campaign, and calls for an overhaul of the whole economy, including having the federal government guarantee a job for everyone, as well as abolishing air travel and fossil fuel use, at the cost of $52 trillion to $94 trillion over 10 years, based on estimates from the American Action Forum, a center-right fiscal think tank.

Trump mocked the proposal in his March 2 speech at the CPAC conference.

“Green New Deal—I encourage it. I think it’s really something that they should promote. They should work hard on. It’s something our country needs desperately. They have to go out and get it,” he said. “But I’ll take the other side of that argument only because I’m mandated to.”

During the Breitbart interview, Trump dismissed the idea that American politics may take a turn to the left after his presidency, pointing to his relatively solid poll numbers during the past week.

He said the 2020 presidential election will show whether the socialist sentiments are on the rise or not.

“I don’t know if there will be a rise, we have to see that—and that we will only know in an election,” he said.