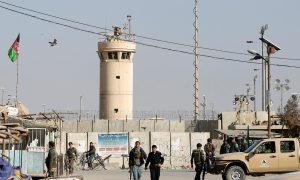 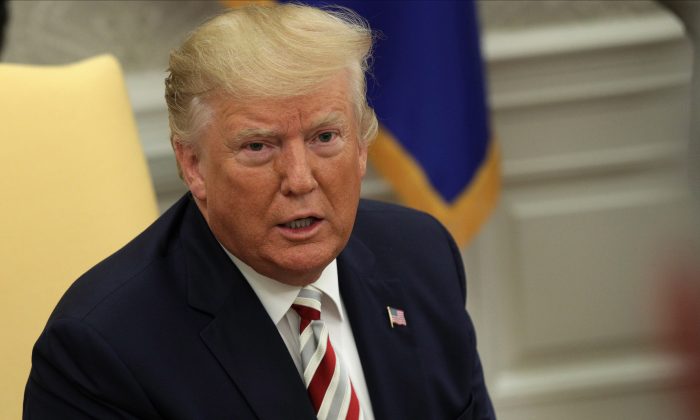 U.S. President Donald Trump speaks to members of the media as he meets with President of Romania Klaus Iohannis in the Oval Office of the White House on Aug. 20, 2019. (Alex Wong/Getty Images)
US News

President Donald Trump announced that he’s canceling U.S.–Afghan peace negotiations after learning that the Taliban launched a terror attack in Kabul thinking it would “strengthen their bargaining position.”

“I immediately cancelled the meeting and called off peace negotiations,” Trump wrote on Twitter on Sept. 7.

….only made it worse! If they cannot agree to a ceasefire during these very important peace talks, and would even kill 12 innocent people, then they probably don’t have the power to negotiate a meaningful agreement anyway. How many more decades are they willing to fight?

Trump said that there had been secret arrangements made for two private meetings on Sept. 8: one with Afghan President Ashraf Ghani and another with major Taliban leaders.

“They were coming to the United States tonight,” the president wrote.

Trump said in his tweets that the Taliban admitted to using the attacks as a means to give them a stronger negotiating position in the peace talks with the Afghan government and the United States.

“Unfortunately, in order to build false leverage, they admitted to an attack in Kabul that killed one of our great, great soldiers, and 11 other people.

“What kind of people would kill so many in order to seemingly strengthen their bargaining position?”

On Sept. 5, an explosion from a Taliban car bomb killed a U.S. soldier, a Romanian service member, and 10 civilians in a busy diplomatic area in Kabul near the U.S. Embassy.

Ortiz was the fourth U.S. service member killed in the past two weeks in Afghanistan, amid numerous other attacks by the Taliban and other extremist groups, despite the peace negotiations.

The Trump administration had been hopeful for a peace agreement that could bring an end to the almost 18-year war in Afghanistan that started when the Bush administration invaded the country in October 2001 following the Sept. 11 attacks.

Since then, the United States has lost more than 2,400 soldiers and spent more than $800 billion on the war. The United States and NATO formally concluded their combat mission in 2014, but U.S. and allied troops remain, conducting strikes on the ISIS terrorist group and the Taliban, and working to train and build the Afghan military.

Taliban insurgents, however, control nearly half of Afghanistan. They carry out near-daily attacks, mainly targeting security forces and government officials.

The Taliban have so far refused direct talks with the internationally recognized Western-backed government in Kabul, which it claims is an illegitimate “puppet” regime of the United States. This line of reasoning also appears to be applied to civilians, as seen in Taliban spokesman Zabihullah Mujahid’s referring to civilian casualties as “invaders.”

Read More
Pakistan Helping US to Push Taliban for Ceasefire

Khalilzad has said 5,000 U.S. troops would be withdrawn from five bases in Afghanistan within 135 days of a final deal. There are about 13,000 to 14,000 troops currently in the country.

However, the Taliban want all of the approximately 20,000 U.S. and NATO troops out immediately, while the United States seeks withdrawal in phases that would depend on the Taliban meeting certain conditions, such as a reduction in violence.

“We’ve been there for 18 years. It’s ridiculous,” Trump said last month. “We’re not really fighting; we’re almost more of a police force over there.” But Afghanistan remains dangerous, and some U.S. presence is needed, he said.

The talks had also sought guarantees from the Taliban that Afghanistan wouldn’t again become a safe haven for extremist groups such as al-Qaida and the local affiliate of the ISIS terrorist group.

The Afghan government on Sept. 4 said it remains concerned that a full U.S. troop withdrawal that moves too quickly and without the Taliban meeting conditions, such as reducing violence, could lead to “total civil war” such as the one that engulfed the country in the 1990s, after a coup by Afghanistan’s Soviet-backed communist party, the People’s Democratic Party of Afghanistan (PDPA).

Trump said on Twitter: “If they cannot agree to a ceasefire during these very important peace talks, and would even kill 12 innocent people, then they probably don’t have the power to negotiate a meaningful agreement anyway. How many more decades are they willing to fight?”