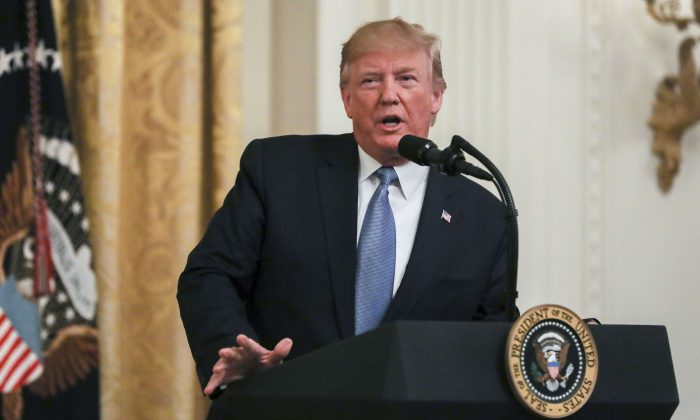 President Donald Trump said the Democratic Party is endorsing socialism after its leaders in Congress came to the defense of four representatives whom Trump called “radical left congresswomen.” Trump blasted the four and suggested they should apologize for “horrible and disgusting actions.”

“The [Democrats] were trying to distance themselves from the four ‘progressives,’ but now they are forced to embrace them. That means they are endorsing Socialism, hate of Israel and the USA! Not good for the Democrats!” Trump said.

Earlier that day, he asked, rhetorically, when the congresswomen will “apologize to our Country, the people of Israel and even to the Office of the President, for the foul language they have used, and the terrible things they have said.”

“If Democrats want to unite around the foul language & racist hatred spewed from the mouths and actions of these very unpopular & unrepresentative Congresswomen, it will be interesting to see how it plays out,” he said. “I can tell you that they have made Israel feel abandoned by the U.S.”

Trump then followed with a quote from Sen. Lindsey Graham (R-N.C.), who called Ocasio-Cortez and the others “a bunch of communists” who “are anti-Semitic” and “anti-America.”

A day earlier, Trump said on Twitter that the “‘Progressive’ Democrat Congresswomen” are “loudly and viciously telling the people of the United States, the greatest and most powerful Nation on earth, how our government is to be run” while being “from countries whose governments are a complete and total catastrophe, the worst, most corrupt and inept anywhere in the world (if they even have a functioning government at all).”

“Why don’t they go back and help fix the totally broken and crime infested places from which they came,” Trump wrote. “Then come back and show us how it is done. These places need your help badly, you can’t leave fast enough. I’m sure that Nancy Pelosi would be very happy to quickly work out free travel arrangements!”

“So sad to see the Democrats sticking up for people who speak so badly of our Country and who, in addition, hate Israel with a true and unbridled passion. Whenever confronted, they call their adversaries, including Nancy Pelosi, ‘RACIST,’” he said. “Their disgusting language and the many terrible things they say about the United States must not be allowed to go unchallenged. If the Democrat Party wants to continue to condone such disgraceful behavior, then we look even more forward to seeing you at the ballot box in 2020!”

The congresswomen responded by accusing Trump of racism, xenophobia, and intolerance and called him angry, inept, and corrupt.

Senate Minority Leader Chuck Schumer (D-N.Y.) accused Trump of using a racist trope by telling the women to “go back to their countries.”

Trump, however, also said the congresswomen should “then come back and show us how it is done,” which appears to be inconsistent with the sentiment Schumer suggested.

“We will never be a Socialist or Communist Country. IF YOU ARE NOT HAPPY HERE, YOU CAN LEAVE! It is your choice, and your choice alone. This is about love for America,” Trump said in another July 15 tweet.

The references to Israel and racism appear aimed at comments by Omar and Tlaib. Both have aired tropes that have been criticized as anti-Semitic, including Omar’s 2012 tweet that “Israel has hypnotized the world” and Tlaib’s tweet that pro-Israel senators “forgot what country they represent.”

Omar and Tlaib have also supported the “Boycott, Divestment and Sanctions” campaign against Israel, which lists among its demands the right of Palestinian refugees and their descendants to return to Israel. The refugees chose to leave or were forced out upon the Arab states’ invasion of the newly declared Israeli state in 1948, though some were also reportedly forced out by Jewish fighters before the war.

Israel considers the “right of return” illegitimate. Some also consider the demand equivalent to eliminating the Jewish state, since it would make Jews a minority in Israel.

Trump’s mention of “foul language” likely references Tlaib’s remark to her supporters that “we’re going to impeach the [expletive],” when speaking of Trump the day she took office in January.

Vice President Mike Pence denounced her for the comparison in a speech at the Christians United for Israel summit in Washington on July 8.

“To compare the humane work of dedicated men and women of Customs and Border Protection with the horrors of the Holocaust is an outrage,” Pence said. “The Nazis took lives. American law enforcement saves lives every day.”

Ocasio-Cortez tried to qualify her remarks by saying that concentration camps don’t necessarily refer to the ones run by Nazis during World War II. But in her original reference, she also used the phrase “Never again”—a term synonymous with denunciation of the Holocaust.

Tlaib was among those who backed Ocasio-Cortez’s comparison.

Trump’s rhetorical question why the congresswomen don’t “go back and help fix the totally broken and crime infested places from which they came” directly applies only to Omar, who was born in Somalia, a country that has lacked a functioning government since the late 1980s and has been mired in instability, terrorist attacks, and civil war.

The other three lawmakers are daughters of immigrants and were born in the United States.

Trump’s reference to Pelosi being called racist likely pertained to remarks by Ocasio-Cortez, who appeared to imply that Pelosi was racist by saying that Pelosi’s “explicit singling-out of newly elected women of color” was “disrespectful.”

Update: The article has been updated with further comments from President Donald Trump as well as comments of Sen. Chuck Schumer.