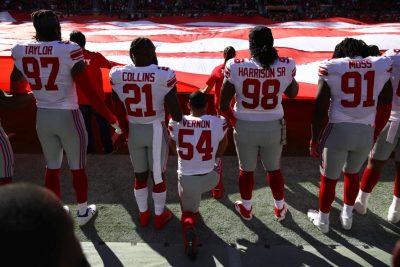 Olivier Vernon #54 of the New York Giants kneels during the national anthem prior to their NFL game against the San Francisco 49ers at Levi's Stadium on Nov. 12, 2017 in Santa Clara, California. (Ezra Shaw/Getty Images)
US News

President Donald Trump took to Twitter after a New York Giants player knelt for the national anthem on Thursday night, Thanksgiving, to call out the NFL commissioner’s leniency toward NFL protests.

“Can you believe that the disrespect for our Country, our Flag, our Anthem continues without penalty to the players. The Commissioner has lost control of the hemorrhaging league. Players are the boss!” Trump tweeted on Friday morning.

He linked to a tweet from the White House director of social media, Don Scavino Jr., who said Giants player Olivier Vernon was “not being thankful” when he knelt during the Thanksgiving Day game.

Can you believe that the disrespect for our Country, our Flag, our Anthem continues without penalty to the players. The Commissioner has lost control of the hemorrhaging league. Players are the boss! https://t.co/udXP5MR8BC

Vernon was the lone player to take a knee during the anthem, a protest that he has been doing throughout the season.

For his part, Vernon has attempted to explain why he’s protesting:

“Just because you got money or whatever and you play a high-level sport, you’re supposed to be OK with what’s going on?” Vernon said, according to the New York Daily News. “I don’t understand how that’s right. So I’m just gonna continue what I’m doing as a citizen of the U.S.”

On #Thanksgiving dude? While the Anthem is sung by a Master Sergeant of the United States Army to honor the United States of America ? Disgusting and dispicable. Turning off the game #NFL pic.twitter.com/LtzvPm4Yt4

“What it would take for me to stand is if people can understand what the whole message is behind it,” he also told Newsday.

“That would actually help a whole lot, but everybody doesn’t see things that way and tries to distort what the message was from the beginning, which is basically social injustice on African Americans and police brutality.”

On Wednesday, Nov. 22, Trump made another mention of the protests in a tweet.

“The NFL is now thinking about a new idea—keeping teams in the Locker Room during the National Anthem next season,” he wrote. “That’s almost as bad as kneeling! When will the highly paid Commissioner finally get tough and smart? This issue is killing your league!”

He was referring to a Washington Post report, which cited unnamed sources saying team owners and the league would consider doing away with players and coaches standing on the field while the anthem plays if the protests continue.