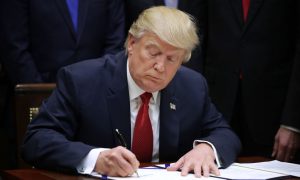 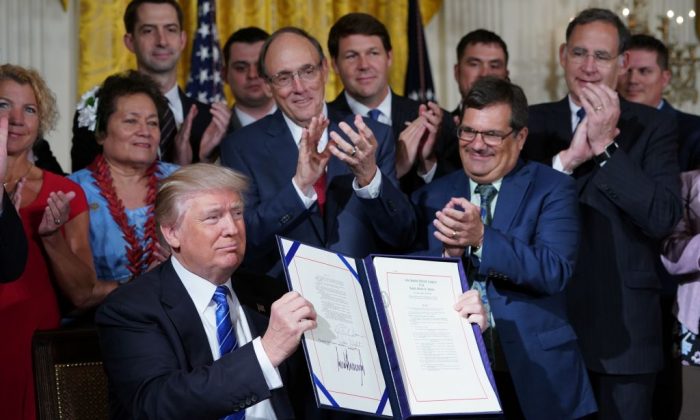 President Donald Trump holds up the bill after signing the Department of Veterans Affairs Accountability and Whistleblower Protection Act of 2017, in the East Room of the White House in Washington on June 23, 2017. (MANDEL NGAN/AFP/Getty Images)
Politics

The act makes permanent an office the president created in April by executive order.

“Our veterans have fulfilled their duty to this nation—and now we must fulfill our duty to them,” Trump told the room full of politicians, veterans and their families.

“For many years the government failed to keep its promises to our veterans. We all remember the nightmare that veterans suffered during the VA scandals that were exposed a few years ago,” he said.

“Veterans were put on secret waitlists, given the wrong medication, given the bad treatments, and ignored in moments of crisis for them. Many veterans died waiting for a simple doctor’s appointment. What happened was a national disgrace,” he continued.

The VA Accountability and Whistleblower Protection Act is in part a response to outrage expressed by veterans and their advocates.

The Veterans Administration had been plagued by scandals and inefficiency for many years.

Critics charged the VA hospitals were underfunded and understaffed and poorly maintained. Veterans complained of wait times to see a doctor that could stretch out to months.

Veterans also reported that sometimes they couldn’t get medical care even in emergencies.

The failures of the VA hospitals were seen as a betrayal of a trust the nation owed its veterans, a population in particular need of care. Veterans have a high suicide rate and often have difficult physical conditions as a result of their service.

For one thing, it gives Veterans Affairs Secretary David Shulkin the tools and the power he needs to set right some of the most egregious wrongs.

For instance, under the prior law it was exceedingly difficult to fire VA employees no matter what mistakes they made, no matter how inefficient they were, regardless even if they committed minor crimes.

The new law gives the administrator much more leeway to ensure performance.

Trump Closer to Fulfilling His Campaign Promise to Veterans

it also offer protection to whistleblowers, so that veterans who want to complain don’t have to fear retribution from the targets of their complaints while the claims are being evaluated.

One complaint heard across much of the country in the past was that wars got money.

Veterans of those wars got nothing.

This latest law seeks to right this grievous wrong.