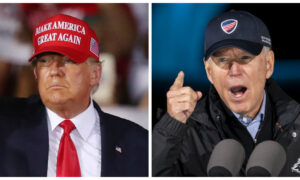 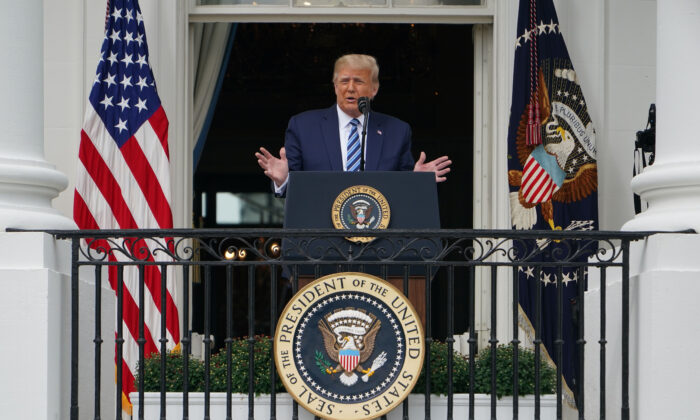 President Donald Trump speaks about law and order from the South Portico of the White House in Washington on Oct. 10, 2020. (Mandel Ngan/AFP via Getty Images)
Trump Administration

Trump wrote on the eve of Election Day: “Just signed an order to establish the 1776 Commission. We will stop the radical indoctrination of our students, and restore PATRIOTIC EDUCATION to our schools!”

The president made reference to the executive order during his rally in Scranton, Pennsylvania, on Monday.

“I just signed that executive order to teach your students pro-American values,” Trump told his supporters.

The president announced the idea of the education commission in September after attempts to remove statues of some American Revolution and colonial figures in the midst of riots sparked by the death of George Floyd in May.

According to details of the executive order published on the White House’s website on Monday, the Trump administration noted “recent attacks on our founding have highlighted America’s history related to race,” adding that they are filled with “one-sided” and “divisive” rhetoric that “ignore or fail to properly honor and recollect the great legacy of the American national experience—our country’s valiant and successful effort to shake off the curse of slavery and to use the lessons of that struggle to guide our work toward equal rights for all citizens in the present.”

“In recent years, a series of polemics grounded in poor scholarship has vilified our Founders and our founding,” the White House’s order added. “Despite the virtues and accomplishments of this Nation, many students are now taught in school to hate their own country, and to believe that the men and women who built it were not heroes, but rather villains.”

The federal commission will encourage a patriotic view of American history, but it noted that some local schools have control over what curriculum is taught to students. Some Democrats have said they would resist the federal initiative.

“A restoration of American education grounded in the principles of our founding that is accurate, honest, unifying, inspiring, and ennobling must ultimately succeed at the local level. Parents and local school boards must be empowered to achieve greater choice and variety in curriculum at the State and local levels,” the order stated.

“The left has warped, distorted and defiled the American story with deceptions, falsehoods, and lies,” Trump said in September. “There’s no better example than the New York Times’ totally discredited 1619 Project.”

He added at the time: “Critical Race Theory, the 1619 Project, and the crusade against American history is toxic propaganda—an ideological poison that, if not removed, will dissolve the civic bonds that tie us together.”

The NY Times-promoted project tried to focus American history on the effects of slavery and the contributions of black individuals. The project’s creator was awarded a Pulitzer Prize earlier this year. It claims the American Revolution was fought to preserve the institution of slavery rather than for individual liberty and natural rights. On Sept. 6, the president wrote that he would not fund schools that use the project.

The National Association of Scholars (NAS) in October called for the Pulitzer Prize Board to revoke the prize awarded to Nicole Hannah-Jones, the leading author of the “1619 Project” over the slavery claim.

“The Project as a whole was marred by similar faults,” the NAS scholars wrote, saying that prominent historians have been pointing out the Project’s “serious factual errors, specious generalizations, and forced interpretations” since September 2019. Hannah-Jones “did not refute these criticisms or answer them in a respectful or meaningful way. Instead, she dismissed them,” they said.