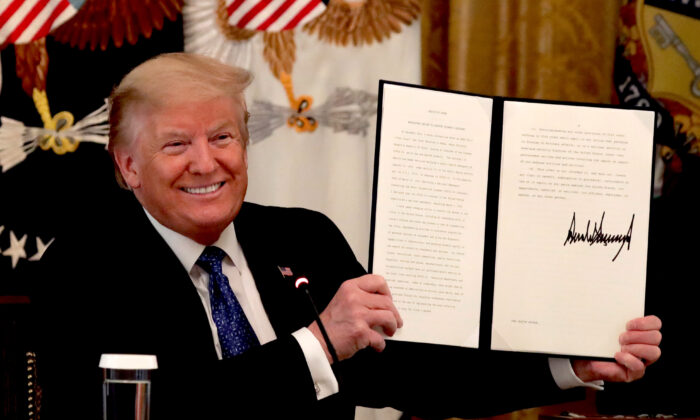 President Donald Trump holds up a copy of an executive order he signed on DOT deregulation, during a meeting with his cabinet in the East Room of the White House on May 19, 2020. (Alex Wong/Getty Images)
Trump Administration

President Donald Trump on Tuesday signed an executive order directing federal agencies to cut regulations in a move to spur economic growth after weeks of lockdowns that were intended to slow the spread of the CCP virus.

Trump, who signed the order during a cabinet meeting, told federal agencies to do away with “unnecessary regulations that impede economic recovery” and also directs agencies to “review the hundreds of regulations we’ve already suspended in response to the virus and make the suspensions permanent where possible.”

Agencies can use emergency powers to speed up the cutting of regulations for new rules that will create more jobs, he added.

These regulation cuts are necessary “because with millions of Americans forced out of work by the virus, it’s more important than ever to remove burdens that destroy American jobs,” the president remarked. “We’re fighting for the livelihoods of American workers, and we must continue to cut through every piece of red tape that stands in our way,” the president said.

Trump has made the cutting of regulations to trigger economic growth a hallmark of his administration.

The White House has not yet released the text of the emergency order.

According to the Brookings Institution, Trump had implemented 277 deregulation orders since he took office, while the Competitive Enterprise Institute noted that his administration has added just 3,281 rules to the Federal Register, which is the lowest on record dating back to the 1970s.

“We’ve cut far more regulations by a factor of a lot than any other administration, any other presidency,” he said. “So, it’s really something.”

After numerous states began implementing stay-at-home orders in March, more than 36 million people have filed jobless claims across the United States, according to data from the Department of Labor. As a result, there has been mounting pressure on local leaders to allow businesses to reopen and services deemed nonessential to resume.

In recent days, Trump has met with industry leaders, farmers, factory workers, and other business luminaries to discuss how to reopen.

Trump recently used the Defense Production Act, a rarely used law, to require meat processing firms to stay open during the CCP (Chinese Communist Party) virus outbreak. A number of meat plants were forced to shut down after workers contracted the virus, putting the nation’s food supply chain at risk.