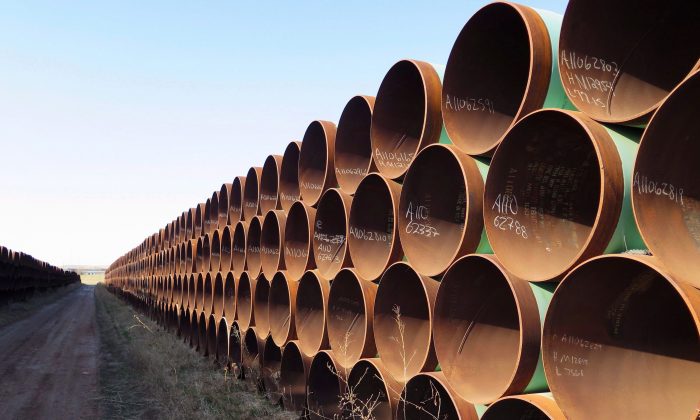 President Donald Trump signed an executive order on March 29, that authorized the construction of the Keystone XL oil pipeline with a facility in Montana.

Friday’s permit replaces one that was granted in March 2017.

The permit comes two years after he first approved it, and it’s more than a decade after it was proposed. It was a frequent target of environmentalists, who physically attempted to block its construction.

“By virtue of the authority vested in me as President of the United States of America, I hereby grant permission, subject to the conditions herein set forth, to TransCanada Keystone Pipeline” pic.twitter.com/sTksA3XVWx

In November, a judge blocked the project, saying the Trump administration hadn’t considered potential oil spills and other environmental impacts of the pipeline. The pipeline would ship crude oil from tar sands in western Canada across the continent to the Gulf Coast of the United States.

“I hereby grant permission, subject to the conditions herein set forth, to TransCanada Keystone Pipeline … to construct, connect, operate and maintain pipeline facilities at the international border of the United States and Canada at Phillips County, Montana, for the import of oil from Canada to the United States,” the executive order read, according to a tweet of the order from a Vox reporter.

A spokesperson for the White House said the new permit “dispels any uncertainty.”

“Specifically, this permit reinforces, as should have been clear all along, that the Presidential Permit is indeed an exercise of Presidential authority – that is not subject to judicial review under the Administrative Procedure Act,” the spokesperson added to the political news website.

TransCanada, the firm constructing the pipeline, stated that President Trump “has been clear that he wants to create jobs and advance U.S. energy security, and the Keystone XL pipeline does both of those things,” AP reported.

He added that the construction of Keystone XL will create thousands of jobs and will boost crude oil delivery to American refineries. The firm said: “the project can be built and operated in an environmentally sustainable and responsible way.”

“It would be highly unlikely that any court would allow an end-run on its well-considered injunction that’s been affirmed by the Ninth Circuit (Court of Appeals). The likelihood of that is virtually non-existent,” Stephan Volker, an attorney for environmentalists, told AP.

Judge Brian Morris of the U.S. District Court for Montana halted construction of the Keystone XL in November 2018, Reuters reported.

Trump also signed an executive order to hasten the building of the Dakota Access Pipeline, which was met with protests in late 2016. According to Fox News, North Dakota had to spend $38 million in policing the protests.