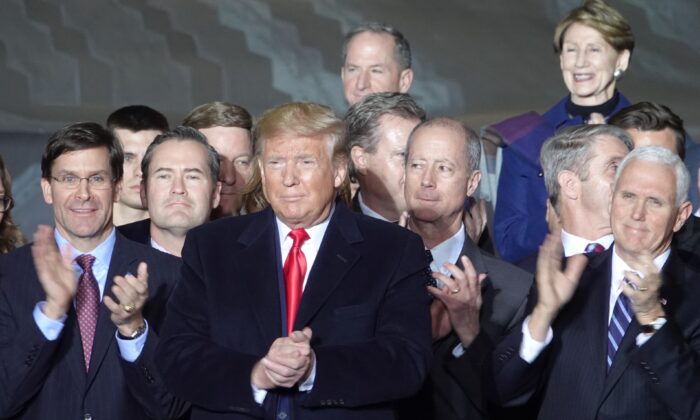 JOINT BASE ANDREWS, Md.—President Donald Trump signed a $738 billion defense bill on Dec. 20, calling it “the largest-ever investment” in the U.S. military.

The bill authorizes the creation of a Space Force and the first-ever paid family leave for federal employees. It also addresses a wide range of potential threats from China.

Trump signed the National Defense Authorization Act (NDAA) during a ceremony at Joint Base Andrews before flying to his Mar-a-Lago resort in Florida, where he is expected to spend his Christmas holiday.

“Today’s signing of the 2020 NDAA is a watershed event in the truest sense of the word,” Trump said.

The legislation establishes the Space Force as a sixth branch of the military, one of Trump’s top priorities for the Pentagon.

“With my signature today, you will witness the birth of the Space Force,” Trump said, calling it “a big moment.”

“Amid grave threats to our national security, American superiority in space is absolutely vital.”

Congress approved the NDAA in a strong bipartisan vote. The bill cleared the House on Dec. 11 by a vote of 377–48; on Dec. 17, the Senate voted 86–8 to approve the legislation and send it to Trump’s desk.

The bill prioritizes the modernization of the military and the expansion of its workforce. It provides $22 billion more to the armed forces in 2020 than last year, plus another $5.3 billion for disaster recovery.

It also grants 12 weeks of paid parental leave to the federal government’s 2.1 million employees. The provision will cost $3.3 billion from 2021 to 2024, according to Congressional Budget Office estimates. The legislation also provides a 3.1 percent pay increase for members of the military and federal civilian employees.

“This will be the largest pay raise in more than 10 years,” Trump said.

China is mentioned more than 200 times in the NDAA’s conference report, the compromise product negotiated between the House and the Senate via conference committee. The legislation contains a series of provisions that aim to address threats from Beijing, including requiring reports on China’s overseas ambitions and its military relations with Russia.

There are also provisions that prohibit federal money from being used to purchase rail cars or buses from Chinese-owned or China-based companies.

The NDAA also includes language that prohibits the U.S. military from “entering into or renewing a contract” for buying Chinese drones over concerns that the products could be used for spying.

The country’s opioid crisis is also addressed in the massive defense bill. The NDAA contains provisions targeting threats posed by fentanyl originating from China that would impose “economic and other financial sanctions to foreign traffickers of illicit opioids.”

The bill also contains language that calls on Beijing to “follow through on full implementation” of new regulations effective on May 1, and to tighten control on all fentanyl analogs.

The bill also focuses on strategic competition with Russia.

Tough sanctions are included in the legislation against Russia’s newest gas pipeline to Europe. It requires imposing sanctions on both individuals and firms backing construction of Russia’s Nord Stream 2 natural gas pipeline. The bill also calls for sanctions on Turkey over its purchase of Russia’s S-400 missile defense systems.