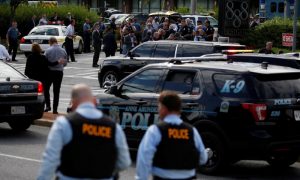 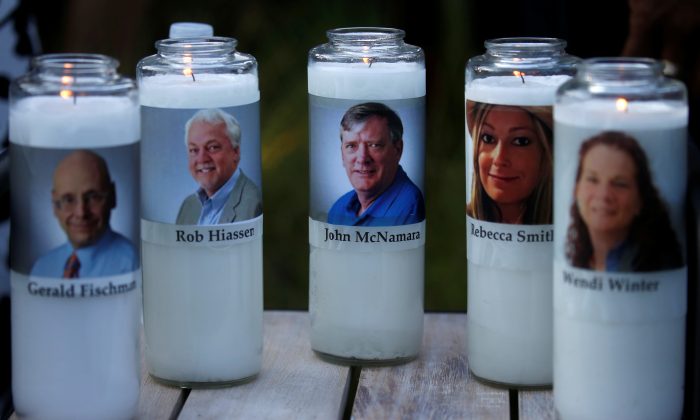 Candles representing the slain Capital Gazette journalists sit on display during a candlelight vigil held near the newspaper's office, the day after a gunman killed five people inside the building in Annapolis, Maryland. (Reuters/Leah Millis)
Trump Administration

“The memorial will honor the reporters, photojournalists, producers, editors and others who have died while performing their jobs as journalists,” FJM chairman David Dreier said in a statement.

“It will demonstrate to our citizens and to visitors from around the world that our country values a free press, honors the sacrifices of journalists and supports the family, friends and colleagues of the fallen.”

“I am very, very grateful,” Dreier said just minutes after hearing that Trump had signed the bill, reported the Capital Gazette.

The Committee to Protect Journalists reported that the number of journalists murdered in retaliation for their work more than doubled in 2020. Criminal gangs and terrorist groups have targeted reporters working in violent but democratic nations, the organization stated.

Dreier’s foundation introduced plans to build the memorial last year, about a year after the deadliest attack on journalists in U.S. history—the mass shooting at the Capital Gazette newsroom in Annapolis, Maryland, on June 28, 2018, which killed five people.

Wendi Winters, one of the victims, was posthumously awarded the Carnegie Medal by the Carnegie Hero Fund Commission—the highest honor for civilian heroism in the United States and Canada.

“The free media, one of the pillars of our nation, is under attack figuratively and literally across America. Too many, including five innocent souls lost in the shooting at the Capital Gazette in Annapolis, gave everything they had in defense of democracy, transparency, and freedom,” Cardin said in a statement.

“This new memorial will honor the lives of those who died reporting the news and supporting the media on behalf of the American people,” he added. “It will be a steadfast symbol of their sacrifice and the fragility of our democracy. Those who personify the First Amendment rights granted to every citizen have made our nation stronger.”

Portman applauded Trump for signing the bill to establish the memorial.

“This memorial will serve as a fitting tribute to the men and women in journalism, including those from the Capital Gazette, who have paid the ultimate sacrifice in the defense of the First Amendment,” he said in a statement.