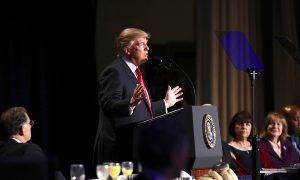 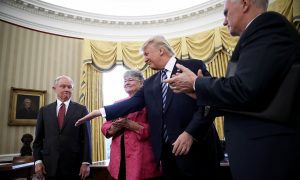 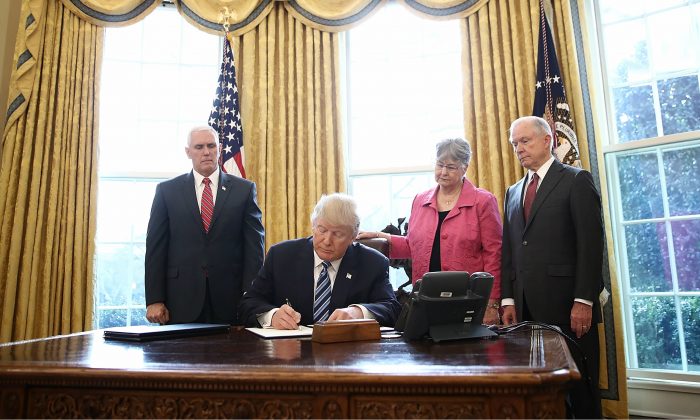 President Donald Trump signs an executive order in the Oval Office of the White House in Washington on Feb. 9, 2017. (Win McNamee/Getty Images)
News

“These executive actions continue to deliver on my campaign promises,” the president said at the Oval Office.

Vice President Mike Pence and Jeff Sessions were in the room as he delivered the remarks.

“I am signing three executive actions today designed to restore safety in America,” Trump said, adding that the orders will curb “threat of rising crime,” while noting that “things will get better very soon.”

The president signed an order to enforce federal laws against transnational criminal organizations and international drug traffickers. These orders will “break the back” of criminal cartels that are “destroying our nation,” he said.

According to Trump’s comments, the second and third orders were signed to establish a new task force on crime reduction and promoting public safety.

“A new era of justice begins and it begins right now,” Trump said at the swearing in of Sessions, who later made brief remarks on crime and illegal immigration.

“We have a crime problem. I wish the rise that we’re seeing in crime in America today was some sort of aberration or blip,” Sessions said. “We need to end that lawlessness that threatens the American people.”

The Senate on Wednesday voted to confirm Sessions as the 84th attorney general—despite resistance from Senate Democrats. Only one Democratic official, Sen. Joe Manchin of West Virginia, voted in favor of Sessions.