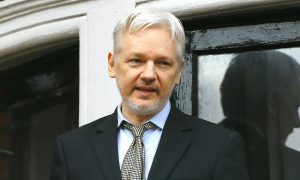 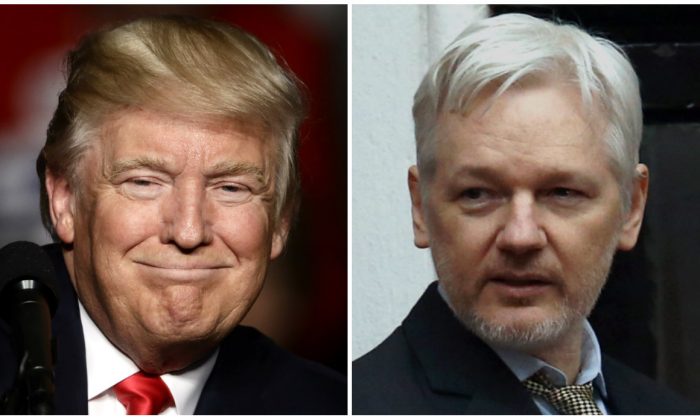 Trump Sides With Assange, Casting Doubt on US Intel Case on Hacking

NEW YORK—President-elect Donald Trump is siding with WikiLeaks founder Julian Assange, casting doubt on the U.S. intelligence community’s case that Russia was behind hacking of the Democratic National Committee ahead of the 2016 election.

He’s suggesting that the DNC is to blame for the hacking of its computers and emails, including those of top Hillary Clinton adviser John Podesta.
Trump continued his tweetstorm Wednesday by arguing the DNC did not have a “hacking defense” and questioning why the Democratic Party had not responded “to the terrible things they did and said.”

He appeared to be referring to information in the DNC emails that was made public and led to the resignation of the DNC chairwoman and other officials.

Julian Assange said “a 14 year old could have hacked Podesta” – why was DNC so careless? Also said Russians did not give him the info!

“Julian Assange said ‘a 14 year old could have hacked Podesta’—why was DNC so careless? Also said Russians did not give him the info!” Trump tweeted early Wednesday.

Assange has said his source for the hacked emails WikiLeaks published during the campaign was not a government.

“We can say, we have said, repeatedly that over the last two months that our source is not the Russian government and it is not a state party,” Assange told Fox News.

The American intelligence community and Republicans and Democrats on Capitol Hill insisted, without supporting evidence, that Russia was behind the hacks, but Trump has repeatedly dismissed that allegation, challenging intelligence experts who are supposed to help him make the weightiest possible decisions once he becomes president Jan. 20. Trump has insisted that the government doesn’t really know who’s behind the attacks, saying he knows “things that other people don’t know,” according to The Hill.

He has said he’ll release more information this week.

In a series of tweets Tuesday and early Wednesday, Trump wrote that the timing of an upcoming intelligence briefing on suspected Russian interference in the 2016 election had been delayed.

Trump’s tweets, in line with repeated criticism of some the nation’s intelligence leaders, caused confusion among intelligence officials, who said there was no delay in the briefing schedule.

The fresh clash came as Trump took further steps to fill his Cabinet and key White House positions, with his attention shifting toward the challenges of governing.

Pence issued a direct challenge to Washington Republicans Tuesday: “The president-elect has a very clear message to Capitol Hill. And that is, it’s time to get to work.”

Trump signaled he would not bless all of the GOP’s priorities on Capitol Hill, openly questioning the timing of the House Republican push to gut an independent ethics board just as the new Congress gathered. The House GOP later dropped the effort.

The president-elect promised late Tuesday to hold his first formal news conference since his Nov. 8 election victory next week in New York.

I will be having a general news conference on JANUARY ELEVENTH in N.Y.C. Thank you.

He has already waited longer than any other president-elect in the modern era to hold his first exchange with journalists. Most have held such events within days of their elections.

It was unclear if the news conference would be the venue for his delayed announcement on how he plans to avoid potential conflicts of interest involving his businesses after taking office. Transition officials said multiple topics could be covered, but would not specifically say whether they included Trump’s businesses. Trump was supposed to detail the arrangements at a mid-December news conference, but postponed the event.

Omarosa Manigault, a contestant from the first season of “The Apprentice,” is expected to focus on public engagement in the White House.

Trump also hired Rick Dearborn as a deputy chief of staff and Marc Short as White House legislative director. Both previously served in chief of staff positions on Capitol Hill. The new hires were confirmed by two people familiar with the decision, who insisted on anonymity because they were not authorized to discuss the hiring process publicly.

Trump spent time interviewing prospects for the Department of Veterans Affairs as well, including Leo MacKay, a senior executive at a military contractor who previously served in the VA under President George W. Bush.