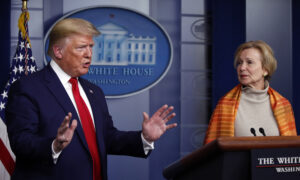 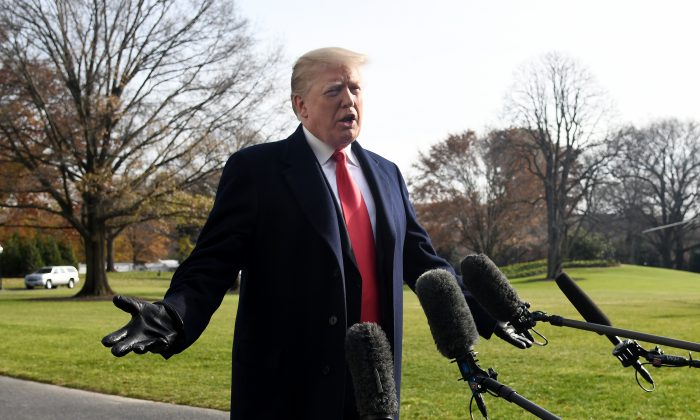 Congress has just a few days left to send a budget bill to the White House that would prevent a partial government shutdown. President Donald Trump made it clear the bill needs to include $5 billion for building a border wall and, on Dec. 17, he doubled down, dismissing border security proposals that exclude a wall.

“Anytime you hear a Democrat saying that you can have good Border Security without a Wall, write them off as just another politician following the party line,” Trump wrote on Twitter. “Time for us to save billions of dollars a year and have, at the same time, far greater safety and control!”

The money Trump wants is a fraction of the roughly $450 billion Congress was poised to approve—before the latest battle over the wall—to fund several agencies which will otherwise run out of money on Dec. 21.

Democratic leaders in Congress, however, refuse to give Trump the money for the wall.

Large swaths of the government are already funded through next September, including the U.S. military and agencies that operate public health care, education, and veterans’ programs.

Republicans hold a solid majority in the House of Representatives, but only a slim 51–49 majority in the Senate, so Democrat support is needed to meet the 60-vote threshold for overcoming a filibuster.

“I am proud to shut down the government for border security,” Trump said. “People of this country don’t want criminals and people that have lots of problems and drugs pouring into our country.”

While border security experts don’t necessarily support a wall from Tijuana all the way to the Gulf of Mexico, many agree that there are plenty of areas that currently lack a physical barrier and could use one.

Customs and Border Protection (CBP), the federal agency responsible for border security, has a priority plan for 33 segments of wall covering 1,100 miles in total. The cost varies from $5 million to $25 million per mile, depending on the terrain, CBP Commissioner Kevin McAleenan said during Dec. 11 Congress hearing.

In the past two months alone, more than 100,000 people have been apprehended for illegally crossing into the United States.

During the White House meeting, Pelosi and Schumer proposed two ideas for keeping the government fully funded, which included extending current funding levels for border security at $1.3 billion. Aides to both on Dec. 17 said Trump had not yet responded.

Senate Majority Leader Mitch McConnell opened the Senate on Dec. 17 urging completion of a spending bill. “We need to make a substantial investment in the integrity of our border and in the safety of American … families,” McConnell said.

Neither he nor his aides would specify whether border security investments must include wall funds. Aides to House Speaker Paul Ryan were not immediately available for comment.

If funds run out, the NASA space program would potentially go unfunded, along with national parks, the U.S. diplomatic corps, and agriculture programs.

Similarly, the Department of Justice and the Department of Homeland Security would be vulnerable to shutdowns, although “essential” employees, such as FBI agents, airport security screeners, and border patrol agents, would still report to work.

Their paychecks, however, would not be issued until the shutdown ends and Congress would have to decide whether to award back pay for them as well as any furloughed workers.

Pelosi has questioned whether Trump has the votes to push the $5 billion funding even through the House. But House Freedom Caucus co-founder Rep. Jim Jordan (R-Ohio) remained optimistic the shutdown will be prevented, speaking to Fox News on Dec. 17.

“This was a central theme, central promise we made the voters in 2016,” he said. “Everyone knows—just good common sense—we should be able to secure our southern border. We need to stand firm and get that done.”

Freedom Caucus chairman Rep. Mark Meadows (R-N.C.) said Dec. 17 he was “not very optimistic that Democrats are going to yield in providing $5 billion in Wall funding.”

However, he said that he was willing to work through Christmas to get the bill passed, NBC News’ Alex Moe reported.