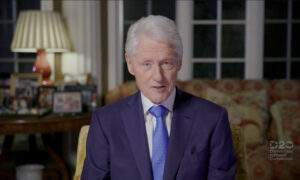 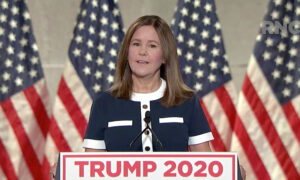 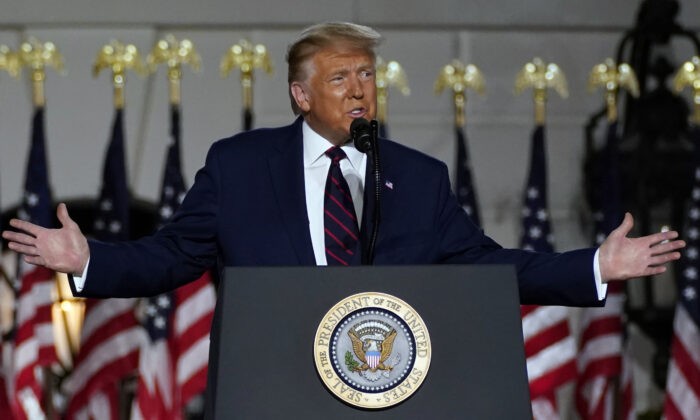 President Donald Trump speaks from the South Lawn of the White House on the fourth day of the Republican National Convention, in Washington, on Aug. 27, 2020. (Evan Vucci/AP Photo)
Donald Trump

'They are coming after me, because I am fighting for you,' president says.
By Mimi Nguyen Ly
Print

President Donald Trump conveyed a message of unity and hope in his renomination acceptance speech at the Republican National Convention as he revisited the actions his administration has taken throughout his first presidential term and shared a bold vision of the future for America, calling on the nation to “make America greater than ever before.”

Addressing around 1,500 guests gathered at the White House’s South Lawn and those watching the convention’s live broadcast from afar on its final day, Trump praised the country’s greatness, through its history back to its foundation—faith in God and the pursuit of freedom.

“What united generations past was an unshakable confidence in America’s destiny, and an unbreakable faith in the American People. They knew that our country is blessed by God, and has a special purpose in this world,” Trump said.

“It is that conviction that inspired the formation of our union, our westward expansion, the abolition of slavery, the passage of civil rights, the space program, and the overthrow of fascism, tyranny, and communism.”

Reaching out to Americans of all political persuasions, the president said that the Republican Party “goes forward united, determined, and ready to welcome millions of Democrats, Independents, and anyone who believes in the greatness of America and the righteous heart of the American People.”

“In a new term as President, we will again build the greatest economy in history—quickly returning to full employment, soaring incomes, and record prosperity,” Trump said.

“We will defend America against all threats, and protect America against all dangers. We will lead America into new frontiers of ambition and discovery, and we will reach for new heights of national achievement. We will rekindle new faith in our values, new pride in our history, and a new spirit of unity that can only be realized through love for our country.”

Trump recounted his various actions over the past four years of his presidency that comprise his “Make America Great Again” agenda and shared his vision, outlining a number of policy stances.

He denounced the actions of the radical left, telling Americans, “Always Remember: they are coming after me, because I am fighting for you.”

“This election will decide whether we will defend the American way of life, or whether we allow a radical movement to completely dismantle and destroy it,” he said.

‘I Kept My Promises’

In his speech, the president said that his opponent, Democratic presidential nominee Joe Biden, had “spent his entire career outsourcing the dreams of American Workers, offshoring their jobs, opening their borders, and sending their sons and daughters to fight in endless foreign wars.”

“Four years ago, I ran for president because I could not watch this betrayal of our country any longer,” Trump continued. “I could not sit by as career politicians let other countries take advantage of us on trade, borders, foreign policy, and national defense,” adding, “From the moment I left my former life behind—and a good life it was—I have done nothing but fight for you.”

“I did what our political establishment never expected and could never forgive, breaking the cardinal rule of Washington Politics—I kept my promises.”

Trump said the administration had “produced the best unemployment numbers for African-Americans, Hispanic-Americans, and Asian-Americans ever recorded,” prior to the devastation caused by the CCP (Chinese Communist Party) virus, also known as the novel coronavirus.

The president touted his immigration policy, which he says has helped secure American borders. He noted the administration’s ending of the “catch-and-release” policy, its efforts to stop asylum fraud, and its actions to defeat human traffickers. “We have deported 20,000 gang members and 500,000 criminal aliens,” Trump also said, adding that the U.S.-Mexico border wall will be completed soon, with 300 miles of it built so far.

With regard to health, the president recounted how he had just signed orders aiming to lower the cost of prescription drugs for U.S. citizens, and passed the “Right to Try” legislation to allow critically ill patients to try out experimental treatment. He also noted the passing of the V.A. Choice and V.A. Accountability and Whistleblower Protection Act.

In efforts to help “bring prosperity to our forgotten inner cities,” Trump noted the administration’s effort to pass bills on prison reform, opportunity zones, and long-term funding of historically black colleges and universities.

On foreign affairs, Trump noted his withdrawal of the United States from the Iran Nuclear Deal; honored his promise to move the U.S. embassy to Jerusalem, Israel; recognized Israeli sovereignty over the Golan Heights, and recently brokered a major peace deal in the Middle East. He also asserted that the administration has “obliterated 100 percent” of the ISIS caliphate, and killed its leader, Abu Bakr al-Baghdadi. “Then, in a separate operation, we eliminated the world’s number one terrorist, Qasem Soleimani,” he added.

Trump said that his administration has “kept America out of new wars” and are bringing home troops, and have spent almost $2.5 trillion to build up the military. The administration also recently launched a new military branch, the Space Force.

The president acknowledged the devastation caused by the global CCP virus pandemic and assured that the country will “defeat the virus” and produce a vaccine before the end of the year. He went on to recount a lengthy list of actions his administration has initiated to mitigate the effects of the pandemic.

Those actions include the ramping up of ventilator production, shipping of personal protective equipment to frontline healthcare workers, mobilization of supplies and personnel to nursing homes and long-term care facilities, development of an advanced testing system, development of various treatments, including convalescent plasma, among others. He also said that the Paycheck Protection Program has “saved or supported more than 50 million American jobs” amid a pandemic that has wreaked havoc on the global economy as well as a record-setting American economy.

A statement from the Biden campaign released late Thursday accused the president of having sowed division in the nation and mismanaged the pandemic.

‘Make America Greater than Ever Before’

Trump vowed to continue his America First agenda over the next four years should be be reelected, laying out a number of policy goals related to the economy, immigration, public safety and law enforcement, healthcare, religious freedom, and others.

He reiterated his pro-life and pro-school choice stance: “We proudly declare that all children, born and unborn, have a god-given right to life,” adding, “in a second term, I will expand charter schools and provide school choice to every family in America. And we will always treat our teachers with the tremendous respect they deserve.”

He acknowledged current anarchy and riots amid ongoing protests since the end of May and promised Americans he would work to ensure public safety. “As long as I am President, I will defend the absolute right of every American citizen to live in security, dignity, and peace,” he said, adding, “The Republican Party will remain the voice of the patriotic heroes who keep America Safe.”

Nearing the end of his speech, Trump proceeded to share his broader future plans.

“Over the next four years, we will make America into the Manufacturing Superpower of the World. We will expand Opportunity Zones, bring home our medical supply chains, and we will end our reliance on China once and for all,” he said.

He rounded out his speech with a summary of his agenda:

Trump called his vision a “unifying national agenda that will bring our country together,” and emphasized to Americans that the November election is “the most important” in U.S. history.

“There has never been such a difference between two parties, or two individuals, in ideology, philosophy, or vision than there is right now,” Trump reiterated.

“Our opponents believe that America is a depraved nation. We want our sons and daughters to know the truth: America is the greatest and most exceptional nation in the history of the world!”