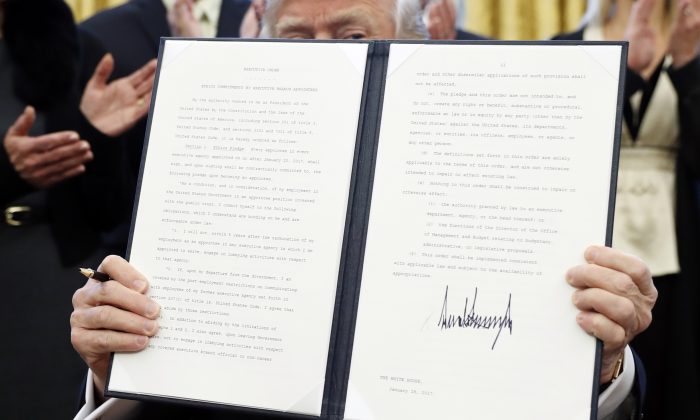 President Donald Trump holds up a signed Executive Order in the Oval Office of the White House in Washington on Jan. 28, 2017. The document includes restrictions against lobbying for "Every appointee in every executive agency appointed on or after January 20, 2017..." (AP Photo/Alex Brandon)
US

WASHINGTON—President Donald Trump acted Saturday to fulfill a key portion of his pledge to “drain the swamp” in Washington, banning administration officials from ever lobbying the U.S. on behalf of a foreign government and imposing a separate five-year ban on other lobbying.

Administration officials described the bans as historic in scope. But it was not immediately clear how either one would be enforced.

Trump has said individuals who want to aid him in his quest to “Make America Great Again” should focus on the jobs they will be doing to help the American people, and not thinking about the future income they could rake in by peddling their influence after serving in government.

“Most of the people standing behind me will not be able to go to work,” Trump joked, referring to an array of White House officials lined up behind him as he sat at his desk in the Oval Office. “So you have one last chance to get out.”

Trump said he talked about the ban a lot during the campaign and “we’re now putting it into effect.”

In a separate action Saturday, Trump took steps to begin restructuring the White House National Security Council. Aides said the changes would help the council better adapt to cyber, digital, terrorist and other modern-day threats. A third action gives the Joint Chiefs of Staff, the president’s top military advisers, 30 days to prepare a plan to defeat the Islamic State group.

Trump Order Bars All Refugees From Entering US for 4 Months

Trump had released the plan for a lobbying ban a few weeks before the November election. It would ban all executive-branch officials from lobbying for five years after leaving their government jobs, and impose a lifetime ban on lobbying for a foreign government—one of several promised policies aimed at curbing the influence of lobbyists.

Some have argued that the ban could make it difficult for Trump to fill thousands of jobs across the administration, saying some candidates may chafe at being asked to agree to the ban and turn down job offers as a result.

The phrase “‘drain the swamp'” became a staple of the final month of Trump’s presidential campaign, with crowds chanting it as loudly as they had been shouting “build the wall” and “lock her up,” references to the wall Trump wants built on the U.S.-Mexico border and his defeated opponent, Hillary Clinton, respectively.

It remained part of Trump’s postelection “thank you” tour of states he won, as audiences cheered along when he vowed to curtail corruption in Washington.