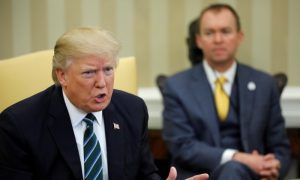 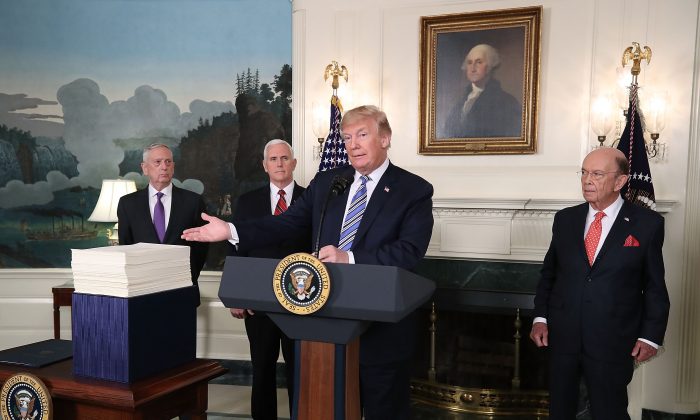 President Donald Trump criticizes the $1.3 trillion spending bill passed by Congress, with Vice President Mike Pence (2nd-L), Defense Secretary Jim Mattis, (L), and Commerce Secretary Wilbur Ross (R) in the Diplomatic Room of the White House on March 23, 2018 in Washington, DC.. before he reluctantly signed it. A message Trump will send to Congress on May 8 requesting rescissions from the federal budget will give him a means to begin reducing federal spending (Mark Wilson/Getty Images)
Trump Administration

Trump Seeks to Claw Back $15 Billion in Useless Spending

A longtime critic of wasteful federal spending, President Donald Trump on May 8 sent a message to Congress that he will seek to do something about it with a historically large rescission proposal.

The message will be under the auspices of the Congressional Budget and Impoundment Control Act of 1974, which provides for a process for a president to request that Congress remove the authority for previously granted funding for specific programs. Such a denial of funding is called a rescission.

According to a senior administration official, presidents from Gerald Ford on, with the exceptions of George W. Bush and Barack Obama, have used rescissions to reduce federal spending. The $15 billion to be proposed by Trump is the largest single rescission request made by any president.

The official said this is the first of several such requests, and it has been tailored to attract the greatest possible congressional support.

The official quoted minority whip Steny Hoyer (D-Md.) as saying: “I wouldn’t irrationally oppose a rescission which said we’ve had money laying in an account that has not been spent for one, two, or three years. It shouldn’t have it just sitting in that account.”

In line with Hoyer’s comment, the administration’s focus in this proposal is on unobligated balances. In layman’s terms, they are proposing to clean up funding that no longer has any purpose or legal authority.

For instance, $4.3 billion is budgeted for the Advanced Technology Vehicles Manufacturing Loan Program, which has not made a loan since 2011, while $800 million is budgeted for the Center for Medicare and Medicaid Innovation. The official said the center will not be able to spend the money before 2020, when it will receive another $10 billion under the terms of Obamacare.

The $15 billion to be proposed by Trump is the largest single rescission request made by any president.

The legal authority for one program with money on the books expired in 2012. Another was funded to address disease outbreaks that have since been resolved. And money budgeted for the Hurricane Sandy emergency watershed program has not been spent because local governments have not been able to provide matching funds. All of these are on the chopping block.

One of the most eye-catching proposals is to rescind $7 billion from the Children’s Health Insurance Program. The official said the legal authority for $5 billion had lapsed, while the other $2 billion was for a contingency program for states that, the official said, no state would qualify for.

Once Trump’s message is transmitted to Congress, a 45-day period begins in which the accounts named are frozen.

The official said House members are enthusiastic about the president’s proposal, and the administration has ongoing discussions with Senate leadership.

While removing such budgetary deadwood as addressed in this proposal would seem to be completely uncontroversial, such unobligated balances have their purposes in the complexities of Congressional budgeting. They can be used as “pay fors” for more spending. By cutting this useless spending, one can raise new spending a corresponding amount, without the budget on paper increasing. And so profligate spenders may not line up to support this rescission request.

The official emphasized that the administration wanted with the current proposal to get the process of rescission back in the “muscle memory” of official Washington, so that future efforts will become more routine.

Other rescission proposals will be introduced once this one is resolved. At least one will look to rescind spending from the just passed omnibus spending bill, the likes of which Trump said he would never again sign, so out of control was its spending.

Another proposal will likely address $178 billion in duplicative spending identified in the Government Accountability Office.