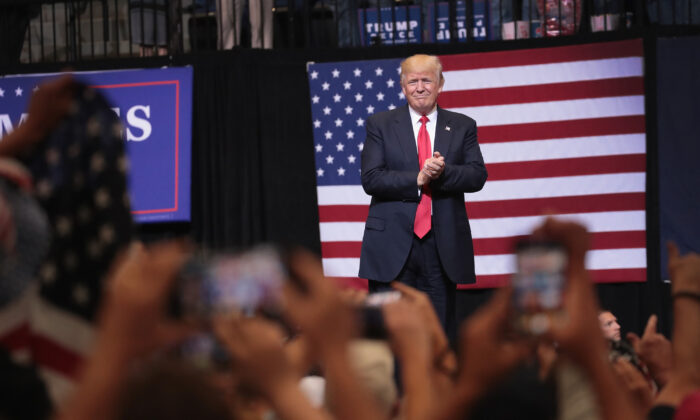 SIOUX CITY, Iowa—President Donald Trump cleaned up during the Iowa Republican Caucus on Feb. 3, receiving 97.1 percent of the vote with all but one of the 1,765 precincts reporting.

In a shrewd move, the Trump campaign scattered more than 80 surrogates around the Hawkeye State to speak on Trump’s behalf at local caucuses.

That move no doubt helped bolster turnout in a noncompetitive Republican cycle. Trump had two opponents on the ballot—Bill Weld and Joe Walsh—but neither mustered a legitimate challenge.

In fact, the Republican Party of Iowa announced that Trump “has overwhelmingly won the Iowa Caucuses, smashing all incumbent turnout records.”

Turnout for incumbent presidents has historically been extremely low. It wasn’t the case on Feb. 3; every Republican official said turnout was unexpectedly high.

Trump has grown on Iowa. Take Sioux County, for example.

Located in Northwest Iowa, Sioux County is as red as it gets. The county is made up of some 34,860 people who are mostly Christian conservatives.

How conservative? In 2016, Trump received 82.1 percent of the vote against Hillary Clinton, who received 12.7 percent.

However, those same Sioux County voters weren’t sold on Trump during the 2016 Iowa Caucus. Trump finished fourth in Sioux County, with just 10.9 percent of the vote.

It was Trump’s worst performance in any of Iowa’s 99 counties.

If the 2016 general election wasn’t proof enough that Trump had rallied support in Sioux County, the Feb. 3 caucus provided a pretty convincing closing argument. Trump won the county with more than 94 percent of the vote.

Tim Allen, the Sioux County Republican chairman, admits he wasn’t supportive of Trump at the 2016 caucus because he wasn’t sure what to think about Trump.

“My big fear on Trump was it’d be a bait-and-switch,” Allen said. “And I think a lot of people were worried about that. He’s got such a varied history.”

“He was difficult to get a read on,” Allen said. “I kind of always figured that he wasn’t serious about it, so I didn’t take him seriously in 2016. And I think a lot of the candidates did the same thing. In their case, it was to their own peril. In my case, it was to learn a little humility and being willing to accept or appreciate somebody who I thought was not anywhere close to the candidate I wanted to see.”

Brad Franken attended the caucus in Sioux Center on Feb. 3. Four years ago, he wasn’t a Trump supporter at the caucus.

“Just some of the things he was saying,” Franken said, explaining the reservations he thinks many had. “We really didn’t know his track record.”

However, some in Sioux County lined up behind Trump.

Jeff Taylor, professor of political science at Dordt University and candidate for Iowa Senate, said he had initial hesitations, but he noticed others around the nation galvanizing behind Trump.

“Partly I was influenced by people I respect,” he said. “Phyllis Schlafly endorsed him. Eventually Sarah Palin. Pat Buchanan in his columns was very pro-Trump. I got to see, OK they’re seeing a thread of his message that’s a certain kind of populism, anti-establishment, anti-Bush legacy. I was not a fan of President Bush, and Trump was willing to take that on in a very direct way. I respected him for that.”

At the root of Trump’s campaign was a simple message.

“A certain kind of nationalism—against globalism, against endless wars in other countries,” Taylor said. “We needed to focus on taking care of our own people and making American great again, not trying to control the world.”

It hooked Taylor. “I found myself watching his rallies, and not only did I agree with his general message, but the guy is inspiring,” he said.

Franken has grown to appreciate the president, especially his efforts to remove government regulations.

“He does what he says,” Franken said. “He’s done a lot for pro-life issues. He’s got the interest of the United States at heart, not his own personal agenda. He’s proven himself.”

Taylor said folks in Sioux County have come around. Trump’s efforts on life, his judicial appointments, and his willingness to fight have inspired others.

Allen acknowledges he was wrong in 2016.

“I’ve never been happier to be wrong,” he said. “He’s been fantastic in everything I really had hoped for in a president for my political life.”