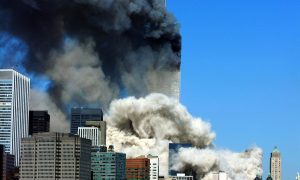 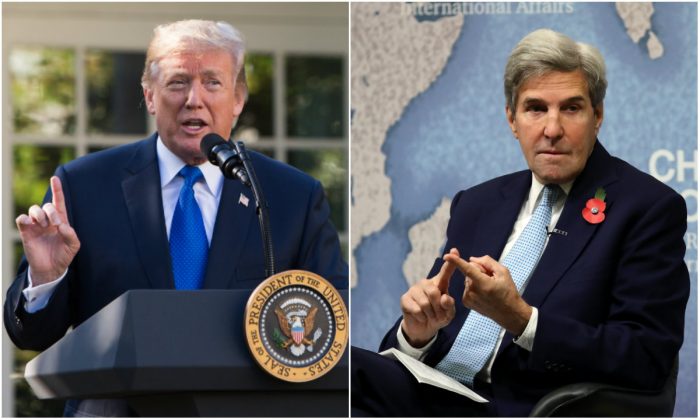 President Donald Trump doubled down on his criticism of attempts of former State Secretary John Kerry to prop up the Iran deal through quiet but incessant contacts with foreign dignitaries, including Iran’s, as revealed in a Boston Globe report on Friday, May 4.

“John Kerry can’t get over the fact that he had his chance and blew it!” Trump said on Twitter on Tuesday morning. “Stay away from negotiations John, you are hurting your country!”

John Kerry can’t get over the fact that he had his chance and blew it! Stay away from negotiations John, you are hurting your country!

Kerry met twice over the past two months with Iranian Foreign Minister Javad Zarif. He has also met with German President Frank-Walter Steinmeier, top European Union official Federica Mogherini, and French President Emmanuel Macron. His aim was “to try to apply pressure on the Trump administration from the outside,” stated the report, citing an anonymous source.

Serving under then-President Barack Obama, Kerry led the negotiations of the deal, which enshrines cessation of many sanctions against Iran in exchange for its postponing its nuclear program for 10-15 years and giving up most of its enriched uranium.

Iran has insisted its nuclear program was not for weapons, but on April 30, Israeli Prime Minister Benjamin Netanyahu presented what he said were Iranian documents, obtained in a daring Israeli intelligence operation, that prove Iran had been developing nuclear weapons before the 2015 deal it signed with the United States, China, France, Russia, United Kingdom, Germany, and the European Union.

“The documents obtained by Israel from inside of Iran show beyond any doubt that the Iranian regime was not telling the truth,” said U.S. Secretary of State Mike Pompeo. “The documents show that Iran had a secret nuclear weapons program for years.”

Trump has severely criticized the deal, since long before his presidential campaign, but so far has abided by it. This week, he faces a deadline to decide whether, for the next three months, the United States will continue to abide and waive key sanctions on Iran.

“As the president’s May 12 deadline to fix the Iran deal approaches, I will be consulting with our European allies and other nations on the best way forward in light of what we now know about Iran’s past pursuit of nuclear weapons and its systematic deception of the world,” Pompeo said.

Yet while Pompeo has been consulting in his official capacity as secretary of state, Kerry has been doing his own consulting, much to the chagrin of Trump.

“The United States does not need John Kerry’s possibly illegal Shadow Diplomacy on the very badly negotiated Iran Deal. He was the one that created this MESS in the first place!” Trump wrote on Twitter on Monday morning.

The United States does not need John Kerry’s possibly illegal Shadow Diplomacy on the very badly negotiated Iran Deal. He was the one that created this MESS in the first place!

In another tweet that day, he said he will announce his decision regarding the deal on Tuesday at 2 p.m.

I will be announcing my decision on the Iran Deal tomorrow from the White House at 2:00pm.

The Iran deal was promoted by Obama as “the best option”—the only way, even temporarily, to keep Iran from wielding nuclear arms. Beyond that, Obama painted a picture of an Iran “rejoining the community of nations” upon being granted sanctions relief.

Yet Iran has been reported to have gone in the opposite direction. Last year, Iran’s Islamic regime announced a 150 percent increase in its military budget—developing long-range missiles, armed drones, and cyber-war capabilities—while putting to use some of the up to $150 billion in assets abroad that had previously been frozen due to sanctions.

The United States lists Iran as a state sponsor of terrorism and has long criticized it for funding terror groups like Hamas, Hezbollah, and the Houthis, “whose chants of ‘death to Israel’ are now also accompanied by vows of ‘death to America,’” wrote Arab–Israeli conflict analyst Alan Dershowitz in an October op-ed.

The Trump administration previously stated that it doesn’t want to necessarily scrap the Iran deal, but it does want to toughen it to include, among other things, the ceasing of Iran’s ballistic missile program.

That echoes the bipartisan criticism—that the Obama-era deal requires too little from Iran in exchange for too much from the international community.

“Even for those who support the [Iran deal] in principle, President Obama and Secretary of State John Kerry’s … serial concessions and excuse-making for the sake of ‘preserving’ the deal have been troubling,” wrote Washington Post journalist Jennifer Rubin in a January 2017 op-ed shortly before Trump took over the presidency.

While the deal was still being negotiated, the Obama administration derailed a law enforcement campaign against Hezbollah’s massive international drug trafficking operation, “even as it was funneling cocaine into the United States,” according to a lengthy Politico investigative report.

When Iran followed the deal with a slew of missile tests, the Obama administration stated the tests didn’t violate the deal. Instead, it placed sanctions on 11 individuals and entities connected to the missile program.

Iran still runs a plant that produces heavy water, a critical component in the production of nuclear weapons-grade plutonium. While the deal only allows Iran to keep a small batch of enriched uranium, it does permit the country to keep 130 tons of heavy water—plenty to make a heavy water reactor for turning natural non-enriched uranium into plutonium.

Just before Obama left office, Iran was to receive another 130 tons of non-enriched uranium from Russia in exchange for 44 tons of heavy water that, if kept, would have made Iran in breach of the deal. The move was “approved by the outgoing U.S. administration and other governments seeking to keep Tehran committed to [the nuclear deal],” The Associated Press learned, referring to two diplomats requesting anonymity.

The Obama administration’s press secretary at the time, Josh Earnest, said such arrangements were “subject to the careful monitoring and inspections that are included in the deal.”

But the documents revealed by Netanyahu give ammunition to critics of the deal, who argue that given Iran lied to cover up its nuclear program that existed long before the deal, it can still find ways to lie about it now.