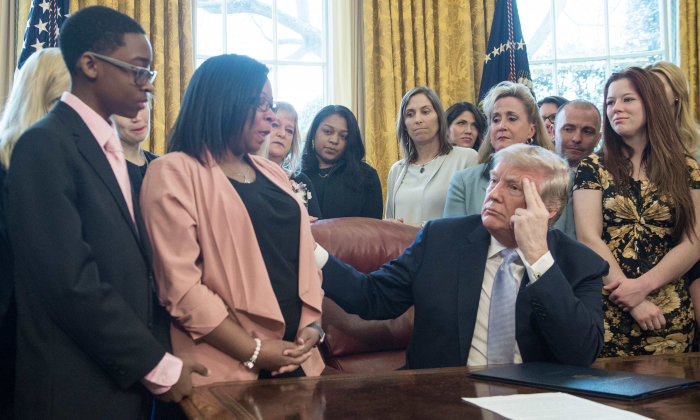 US President Donald Trump listens to Yvonne Ambrose, whose 16-year old daughter was murdered, before signing the Allow States and Victims to Fight Online Sex Trafficking Act of 2017 in the Oval Office at the White House in Washington, DC, on April 11, 2018. (NICHOLAS KAMM/AFP/Getty Images)
Trump Administration

President Donald Trump signed a bill on Wednesday that empowers state prosecutors to go after the owners of websites that host sex-trafficking ads and for victims to file lawsuits against those websites.

Human trafficking, also known as modern slavery, “is worse today than at any other time in history,” Trump said, emphasizing that traffickers exploit modern tools. Reports of suspected child-sex trafficking increased 846% between 2010-2015, largely due to the use of the internet, according to The National Center for Missing and Exploited Children (NCMEC).

The president said he was signing the bill, titled Fight Online Sex Trafficking Act (FOSTA), in part to honor the victims and survivors. He gave credit to his daughter and senior advisor Ivanka Trump for spearheading the battle against human trafficking

“You’ve endured what no person on earth should endure and we are going to do everything in our power to make sure that traffickers are brought to a swift and firm justice,” Trump said.

The woman by Trump’s side at the signing ceremony, Yvonne Ambrose, lost her 16-year-old daughter Desiree Robinson to human trafficking. Robinson who was slain after being prostituted on sex-ads website Backpage.com.

“To lose your child, who has been trafficked, which is modern-day slavery, in our country, to get that call on Christmas that your one daughter, your oldest child has been brutally murdered because she said no, because she did not want to be a part of this, is the worst thing,” Ambrose said in thanking lawmakers and Trump. “It means so much to our family.”

A woman whose daughter was trafficked at the age of 15 said: “hopefully there won’t be too many more.”

Websites known to be major hubs for human trafficking began shutting down sections frequently used by traffickers before Trump signed FOSTA into law. Rep. Ann Wagner (R-Montana) said that 87 percent of these hubs are already offline.

Prosecutors have been frustrated for years because such websites are protected under a clause in the Communications Decency Act that shields website operators from legal action based on the content posted by users. FOSTA limits this protection by specifying that website owners are liable for posts by their users that facilitate human trafficking.

“It was never the intention of the CDA to make a red-light district out of the internet,” Wagner said. “It was a crime offline, it’s a crime online.”

Days before Trump signed the bill, federal authorities seized and shut down Backpage.com, the largest human-trafficking portal in the United States. Seven of the company’s executives were arrested and indicted on with 93 counts, including facilitating prostitution and money laundering. The indictment charges that teenage girls were trafficked on the website. Some of the girls were killed.

Backpage.com listed ads primarily for sex and had affiliates across the United States and in 96 countries around the world. The company generated $135 million in revenue in 2014, according to a Senate report.

Nearly three-quarters of the cases submitted to NCMEC relate to ads posted on Backpage.com. The National Association of Attorneys General described the website as a “hub” of “human trafficking, especially the trafficking of minors.”

“Today, Backpage was shut down. It’s a huge step. Now no child will be sold for sex through this website,” Senator Heidi Heitkamp (D-N.D.) wrote in a Twitter message.

Backpage was at the center of a 20-month Senate investigation which led to the passage of FOSTA. In a seething report, the Senate Subcommittee on Investigations concluded that Backpage knowingly facilitated and concealed illegal activity, specifically child-sex trafficking, and that nearly every dollar of the website’s revenue stemmed from illegal activity.

Internet giants, specifically Facebook and Google, have long resisted the passage of bills similar to FOSTA. This year, both companies caved amid increased scrutiny over their involvement in election meddling and data practices.

Some of the lawmakers present spent years attempting to pass similar bills.

“I’ve been working on this issue for more than a decade,” said Sen. Richard Blumenthal (D-CT). “They said it literally couldn’t be done because we couldn’t overcome the power and the wealth of the folks who had a vested interest in that statute that was protecting the online traffickers.”

“We have tried for 10 years to get this bill through. You’ve just achieved something we haven’t been able to,” House Majority Leader Kevin McCarthy told Trump. “You are saving lives.”