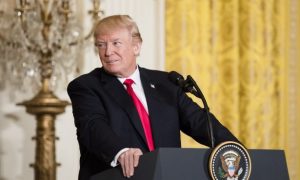 'I Promise Not to Do This to Greenland:' Trump Riffs on Greenland Purchase
0
Share Now
TelegramFacebookTweetEmailTellMeWeReddit
Copy Link 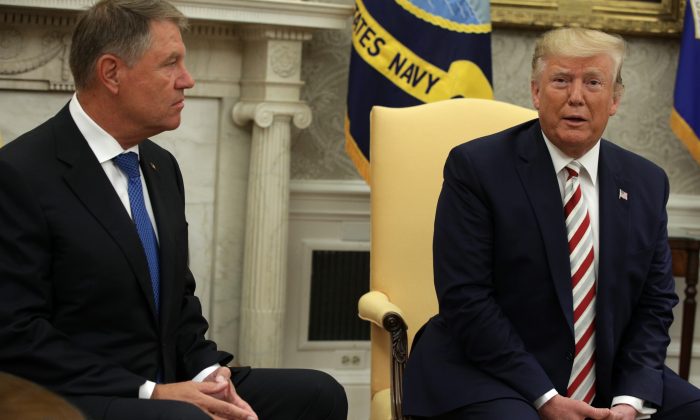 President Donald Trump speaks to members of the media as President of Romania Klaus Iohannis listens in the Oval Office of the White House in Washington, on Aug. 20, 2019. (Alex Wong/Getty Images)
Politics

President Donald Trump said on Aug. 20 that the White House has long-considered cutting payroll tax and rejected warnings about a looming recession.

“Payroll tax is something that we think about and a lot of people would like to see that and that very much affects the … the workers of our country,” Trump told reporters in the Oval Office while in a meeting with Romanian President Klaus Iohannis.

Trump was responding to reports that his administration was considering a temporary payroll tax cut to boost the U.S. economy. This was first reported by Washington Post on Aug. 19, which said discussions over the potential tax cut are in its early stages.

Trump also added that he had been “thinking about payroll taxes for a long time,” contradicting a statement released by a White House official, who spoke on the condition of anonymity, following the Post’s story. According to the official, “cutting payroll taxes is not something under consideration at this time,” Reuters reported.

Trump added that discussions on cutting payroll tax were not fueled by warnings of an impending recession. “Whether or not we do it now or not is—it’s not being done because of recession,” he said.

He also dismissed warnings that claim the country may be heading into a recession, calling the term “inappropriate” and accusing “certain people” and the media for trying to “build [one] up” through pushing the narrative. He continued by saying that if the Federal Reserve would do its job by lowering interest rates “you would see a burst of growth like you’ve never seen before.”

The president also said the White House is also considering a cut in the capital gains tax when investors sell assets. He said he would not need the approval of Congress to link the tax on profits from asset sales to inflation. According to tax code experts, investors would pay far less capital gains tax under an inflation index.