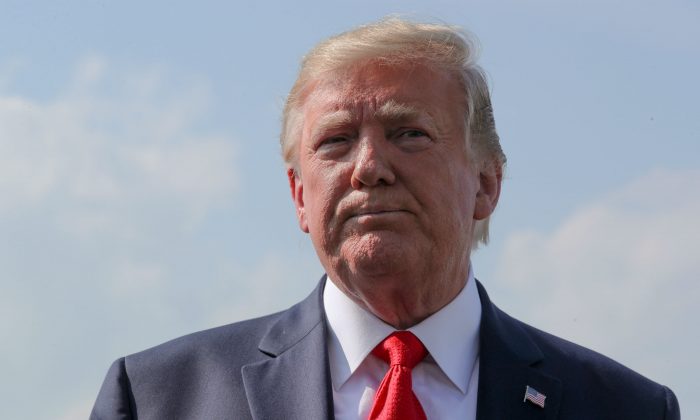 President Donald Trump said July 7 that the United States is benefiting from tariffs imposed on China, as the two countries have resumed talks to resolve an ongoing trade dispute.

Trump and Chinese leader Xi Jinping agreed to restart trade negotiations last month during a meeting held on the sidelines of the G-20 Summit in Japan. As part of the truce, Trump agreed to hold off on imposing threatened tariffs on roughly $300 billion of Chinese goods. However, current U.S. tariffs of 25 percent on $250 billion of Chinese imports, remain in place.

The president, speaking to reporters before leaving for Morristown, New Jersey on July 7, said trade talks with China were going well, referring to phone discussions between U.S. Trade Representative Robert Lighthizer and Treasury Secretary Steven Mnuchin, and China’s top trade negotiator Liu He held during the past week.

“Most importantly, we’re doing very well with the tariffs. We’re taking in billions and billions of dollars from China,” Trump added.

“And right now China is not very happy because thousands of companies are leaving China and they’re going to other places, including the United States because they don’t want to pay tariffs.”

He added that during previous U.S. administrations, China “has ripped us off,” an apparent reference to the Chinese regime’s longstanding unfair trade practices, ranging from theft of U.S. intellectual property to currency devaluation, that the United States is seeking to address through trade talks.

Trump claimed the Chinese regime has been devaluing its currency to offset the effects of the U.S. tariffs.

“They’re devaluing their currency and they’re pumping money in. That’s paying for the tariff,” he said.

The president’s comments come days after the Chinese regime reiterated calls for all U.S. tariffs to be lifted as part of a future trade deal.

“If the two sides are to reach a deal, all imposed tariffs must be removed,” Ministry of Commerce Spokesman Gao Feng said July 4. “China’s attitude on that is clear and consistent.”

He added that a face-to-face meeting is also “in the cards,” and will occur “at some point in the near future.

“There is no timeline. The issue is if you want quality, we do not have to have speed,” he said.