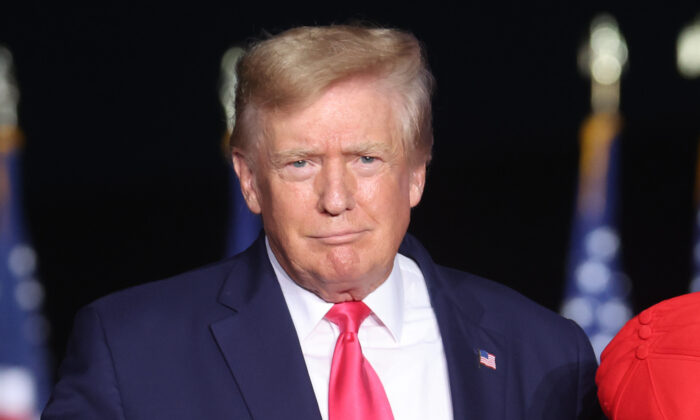 Trump Says Sensitive Materials Should Not Be ‘Cause for Alarm’

Former President Donald Trump said sensitive information in classified documents at his Mar-a-Lago residence “should have never been cause for alarm,” according to a court filing on Aug. 31.

“The purported justification for the initiation of this criminal probe was the alleged discovery of sensitive information contained within the 15 boxes of Presidential records,” the filing (pdf) says, which was written by Trump’s lawyer Lindsey Halligan.

The filing was made mainly in response to the Department of Justice’s recent arguments (pdf) against the appointment of a special master to review materials that were seized from Trump’s Mar-a-Lago residence by FBI agents on Aug. 8. Trump filed a motion for a special master on Aug. 22.

The DOJ argued that such an appointment would “impede” both the federal government’s ongoing criminal investigation and the intelligence community’s review of any national risk created by alleged improper storage of “highly sensitive materials.”

Additionally, the DOJ rejected Trump’s claims to have seized items returned to him.

“Any Presidential records seized pursuant to the search warrant belong to the United States, not to the former President,” the DOJ wrote.

The DOJ’s assertions were rejected by Halligan. According to the filing, the Trump lawyer argued that the “need for a special master remains in place,” while accusing DOJ of demanding the court to “stand down from even considering” appointing a special master.

Halligan also argued that the National Archives and Records Administration (NARA) “simply ignored” the Presidential Records Act and initiated a criminal investigation “just weeks after President Trump voluntarily complied” with the agency’s request for records, according to the filing.

U.S. District Judge Aileen Cannon, who was appointed by Trump in April 2020, has set a hearing for Thursday afternoon at a courthouse in West Palm Beach.

Writing on his Truth Social platform on Wednesday, Trump reiterated his claim that he had declassified documents seized by the FBI.

“Terrible the way the FBI, during the Raid of Mar-a-Lago, threw documents haphazardly all over the floor (perhaps pretending it was me that did it!), and then started taking pictures of them for the public to see,” Trump wrote, referring to a photograph showing documents with classified markings at Trump’s residence.

The photo was released by the DOJ on Tuesday as part of the court filing arguing against Trump’s motion for a special master.

“Thought they wanted them kept Secret? he asked. “Lucky I Declassified!”

Trump later added another Truth Social post on Wednesday, criticizing the FBI for “deceiving” the public with the photo.

“There seems to be confusion as to the ‘picture’ where documents were sloppily thrown on the floor and then released photographically for the world to see, as if that’s what the FBI found when they broke into my home,” Trump wrote. Wrong! They took them out of cartons and spread them around on the carpet, making it look like a big “find” for them.

“They dropped them, not me—Very deceiving,” Trump continued. “And remember, we could have NO representative, including lawyers, present during the Raid. They were told to wait outside.”

Constitutional lawyer Jonathan Turley has since said the photo could leave a “misleading impression.”