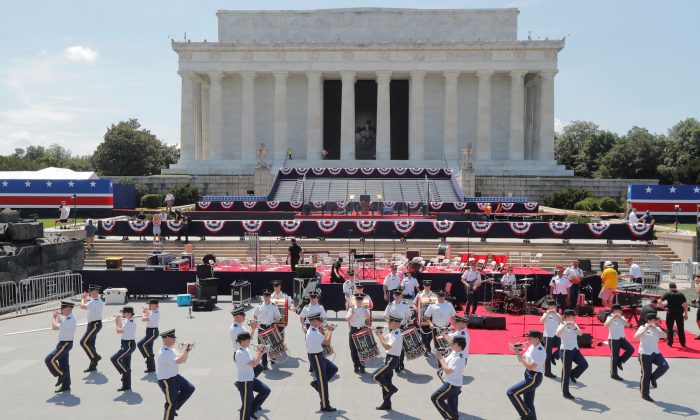 Members of a U.S. military band rehearse as preparations continue for President Donald Trump's Fourth of July speech at the Lincoln Memorial in Washington on July 3, 2019. (Jim Bourg/Reuters)
US News

President Donald Trump said this year’s “Salute to America” event that seeks to honor the U.S. military on July 4 will be the “show of a lifetime,” as anticipation mounts ahead of the annual Independence Day celebrations in Washington.

“Our July 4th Salute to America at the Lincoln Memorial is looking to be really big. It will be the show of a lifetime!” Trump wrote on Twitter early on July 3.

The White House says that the president’s speech, planned to be delivered at the Lincoln Memorial at the event, will focus on patriotism.

Participants in “Salute to America” include the Old Guard Fife and Drum Corps, the U.S. Army Band (“Pershing’s Own”), the Armed Forces Chorus, the United States Marine Corps Silent Drill Team, and many others. Gates to the event open at 3 p.m.

“This is going to be a fantastic Fourth of July with increased access across the National Mall for the public to enjoy music, flyovers, a spectacular fireworks display, and an address by our Commander-in-Chief,” Secretary of the Interior David Bernhardt said of the event in a statement on June 28.

The Defense Department has also arranged for flyovers by the U.S. Navy’s Blue Angels jet squadron, a B-2 stealth bomber, F-35 and F-22 fighter jets, a V-22 tilt-rotor aircraft, the Marine One helicopters, and Air Force One used to transport the president. The Pentagon said that top military leaders will be attending, Reuters reported.

This year’s fireworks display, to take place around 9 p.m., is slated to be one of the longest July 4 fireworks events in D.C. at about 35 minutes.

Two fireworks firms, Ohio-based Phantom Fireworks, and New York-based Fireworks by Grucci are joining forces to showcase the fireworks for free, which the Department of the Interior (DOI) said was equivalent to a donation of at least $700,000. The fireworks are to be launched from West Potomac Park and behind the Lincoln Memorial.

The @NationalMallNPS is home to memorials that commemorate great Americans & significant events in our nation’s history. This year’s #Salute2America will give visitors access to more memorials than before. Learn more: https://t.co/cmu28hyS3V

Thanks to “Phantom Fireworks” and “Fireworks by Grucci” for their generosity in donating the biggest fireworks show Washington D.C. has ever seen. CEO’s Bruce Zoldan and Phil Grucci are helping to make this the greatest 4th of July celebration in our Nations history!

Writing on Twitter, Bernhardt said that for the first time in many years, visitors can access the Lincoln Memorial Reflecting Pool, World War II Memorial, and Constitution Gardens to view the fireworks.

The DOI published the schedule of events for July 4th as below:

Find planning info for this year’s July 4th events including the National Independence Day Parade, Salute to America, A Capitol Fourth, and the biggest fireworks display ever on the National Mall at: https://t.co/pCbq5TpXKK pic.twitter.com/ngL8QghMng