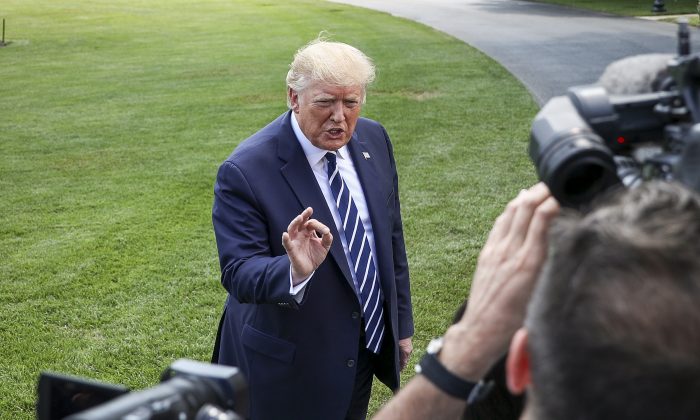 President Donald Trump dismissed Iran’s claim on July 22 that it had allegedly captured spies working for the U.S. Central Intelligence Agency (CIA), saying that the regime was spreading “more lies and propaganda.”

“The Report of Iran capturing CIA spies is totally false. Zero truth,” Trump wrote on Twitter. “Just more lies and propaganda (like their shot down drone) put out by a Religious Regime that is Badly Failing and has no idea what to do. Their Economy is dead, and will get much worse. Iran is a total mess!”

The Report of Iran capturing CIA spies is totally false. Zero truth. Just more lies and propaganda (like their shot down drone) put out by a Religious Regime that is Badly Failing and has no idea what to do. Their Economy is dead, and will get much worse. Iran is a total mess!

Iran announced earlier on July 22 that it had captured 17 spies working for the CIA and sentenced some of them to death, according to Iranian reports. This follows a June announcement where Iran said it had broken up an alleged CIA spy ring.

Iranian state television published images it said allegedly showed CIA officers who had been in touch with the suspected spies. The Ministry of Intelligence said the spies had been arrested in the 12 months to March 2019.

“The identified spies were employed in sensitive and vital private sector centers in the economic, nuclear, infrastructure, military and cyber areas … where they collected classified information,” read a ministry statement.

An Iranian television documentary aired on July 22 purported to show a CIA officer recruiting an Iranian man in the United Arab Emirates. The woman spoke Persian with an accent which appeared to be American.

Trump’s reaction to the report echoed comments Secretary of State Mike Pompeo made earlier on July 22 to Fox & Friends. Pompeo did not specifically comment on the report about the alleged arrests but said the Islamic regime “has a long history of lying.”

“I can’t add much to it specifically,” Pompeo told the program. “I would urge everyone who’s reading that story that the Iranian regime has a long history of lying.”

Longstanding tensions between the United States and Iran became more prominent in recent months following multiple confrontations in the region. Last month, Iran shot down an American surveillance drone claiming that it had violated Iranian airspace, a move that almost sparked a retaliatory air strike. The Pentagon at the time said that the drone was flying in international waters.

Then Trump announced last week that the U.S. Navy took defensive action by shooting down an Iranian drone near the Strait of Hormuz that had come too close.

“The Boxer took defensive action against an Iranian drone, which had closed into a near distance, approximately 1,000 yards,” Trump said July 18, referring to the USS Boxer, an amphibious assault ship that is often deployed in and around the Persian Gulf.

More recently, Iran had seized a British oil tanker, Stena Imperio, near the Strait of Hormuz, for “not following international maritime regulations,” according to the regime. The seizure was seen as a retaliatory move against the UK after the British navy seized an Iranian tanker in Gibraltar on July 4 for allegedly breaching European Union sanctions by smuggling oil to Syria.

Khamenei said on July 16 that Iran would respond to Britain’s “piracy” over the Iranian tanker seizure. The UK is expected to release a response to the British tanker’s seizure in due course.

Iran is currently facing strong economic pressure after the United States withdrew from the Iran Nuclear Deal in 2018 and reimposed stringent sanctions against the Islamic country.

Trump said the deal didn’t do enough to stop Iran from building a nuclear weapon and that it also failed to address other grievances the United States has with the Islamic regime, such as ballistic missile development, support for terrorist groups and militias, threatening maritime shipping routes, and more.