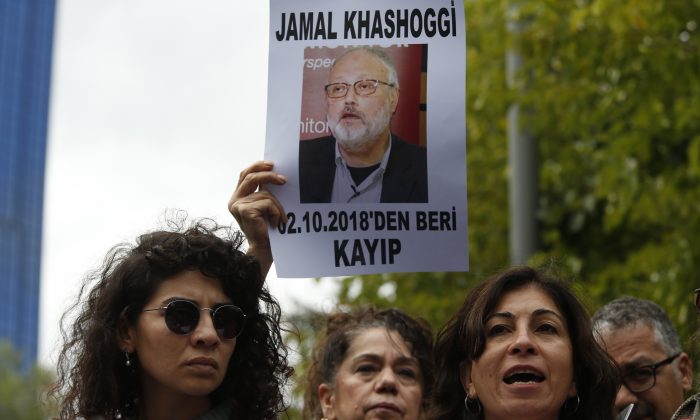 President Donald Trump said Saudi Crown Prince Mohammed bin Salman has denied to him perhaps five times any role in the killing of journalist Jamal Khashoggi, and the U.S. may never know whether he was involved in the murder.

Several news organizations including the Washington Post and New York Times reported that the CIA has concluded the crown prince ordered Khashoggi’s assassination in Istanbul last month, contradicting the Saudi government’s claim he wasn’t involved in the murder. CIA officials have high confidence in their conclusion, which is based on multiple sources of intelligence, the Post reported.

Trump said Nov. 17 the U.S. will issue a “very full report” on the killing by Nov. 20. But Trump denied the CIA has made a judgment, saying Nov. 17 that the intelligence agency hasn’t “assessed anything yet. It’s too early. That was a very premature report.”

Trump told Wallace in the interview conducted Nov. 16 that the prince had told him he had nothing to do with the killing “maybe five times at different points,” including “as recently as a few days ago.”

Trump said he has been briefed on a recording of the murder that Turkey’s President Recep Tayyip Erdogan has shared with the U.S. government, but he didn’t want to listen to it “because it’s a suffering tape, it’s a terrible tape.”

“I know everything that went on in the tape without having to hear it,” Trump said. “It was very violent, very vicious and terrible.”

Some U.S. lawmakers have demanded tougher action against Saudi Arabia for the murder. The Trump administration on Nov. 15 announced sanctions against 17 Saudi officials implicated in the killing, though not the crown prince. Critics in Congress immediately branded the sanctions as insufficient.

Trump defended the U.S. response in the Fox interview as “very heavy sanctions, massive sanctions on a large group of people from Saudi Arabia.”

But he suggested he was wary of damaging the relationship between the U.S. and Saudi Arabia.

“We do have an ally, and I want to stick with an ally that in many ways has been very good,” Trump said.

The Saudis play an important role in the Middle East in pushing back on Iran, but the U.S. shouldn’t rely so heavily on the crown prince, said Democratic Representative Adam Schiff of California, who’s in line to become chairman of the House Intelligence Committee.

“Any regime that would be involved in murdering a journalist this way, we should not be walking hand-in-hand with,” Schiff said on ABC’s “This Week.”

Republican Senator Jeff Flake of Arizona, a frequent critic of Trump who sits on the Senate Foreign Relations Committee, said on CNN’s “State of the Union” that the U.S. response should not be driven by its ties to Saudi Arabia.

“There are things that we’re going to have to confront here soon,” he said. “I hope we do it based on the truth, not in something that we simply want to see because we have a lot invested in the relationship with the crown prince now.”

Republican Senator Lindsey Graham of South Carolina, a member of the Senate Judiciary Committee, said on NBC’s “Meet the Press” that the crown prince is “irrational” and “unhinged.”

“He’s done a lot of damage to the relationship between the United States and Saudi Arabia,” Graham said.