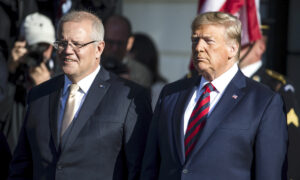 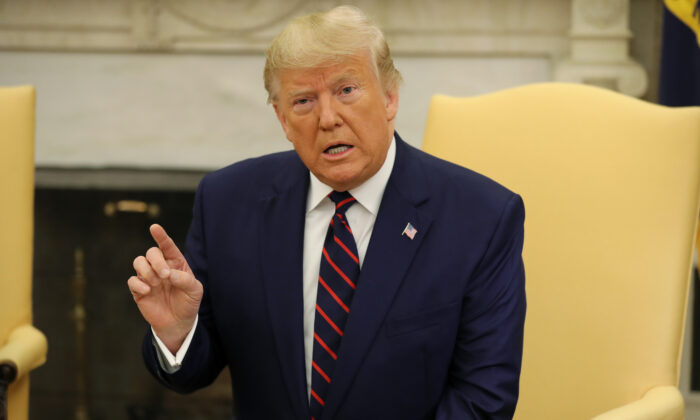 Trump Says Person Who Gave Whistleblower Information Was ‘Dishonest,’ Needs to Be Identified

President Donald Trump said on Oct. 2 that the person who provided the anonymous whistleblower with information about Trump’s call with Ukrainian President Volodymyr Zelensky was “dishonest” and that “this country has to find out who that person was.”

Speaking to reporters at the Oval Office during his meeting with Finnish President Sauli Niinistö, Trump said the person who filed a complaint about the president’s call with Zelensky had mischaracterized details of the July 25 call, saying that the person either provided false information or the person who provided the whistleblower with information was “dishonest.”

“He wrote a vicious conversation. In other words, he either got it totally wrong, made it up, or the person giving the information to the whistleblower was dishonest,” Trump told reporters. “This country has to find out who that person was because that person is a spy in my opinion.”

Trump’s comments come as Congress members from both sides of the aisle have expressed their support to uphold the law to protect the identity of the whistleblower after the president said he wanted to meet the person.

Similarly, Sen. Chuck Grassley (R-Iowa) said on Oct. 1 that he thinks the whistleblower “ought to be heard out and protected.”

“This person appears to have followed the whistleblower protection laws and ought to be heard out and protected. We should always work to respect whistleblowers’ requests for confidentiality,” Sen. Chuck Grassley, who chairs the Senate Finance Committee, said in a statement.

The whistleblower’s complaint is centered on secondhand information of Trump’s call with Zelensky, where the person accused the president of pushing Zelensky to look into former Vice President Joe Biden’s activities in Ukraine. The transcript of the call and the complaint was released to the public last week.

House Democrats accused Trump of pressuring Zelensky to launch the probe and withholding military aid to the country if Ukraine did not comply with the request. But the transcript revealed that Trump had asked Zelensky to look into Crowdstrike, a technology firm that was hired by the Democratic National Committee, to probe what happened to its computer network after an alleged hack, and brought up how Biden admittedly pressured then-Ukrainian President Petro Poroshenko in 2016 to oust a prosecutor in charge of the probe into Ukrainian energy company Burisma, where Biden’s son was a board member. It did not show any quid pro quo as alleged.

Reports about the complaint and allegation surrounding the call prompted Pelosi to launch an impeachment inquiry into the president, where she alleged the president had seriously violated the constitution.