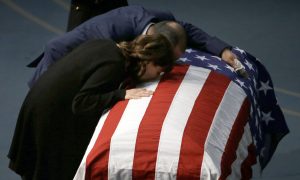 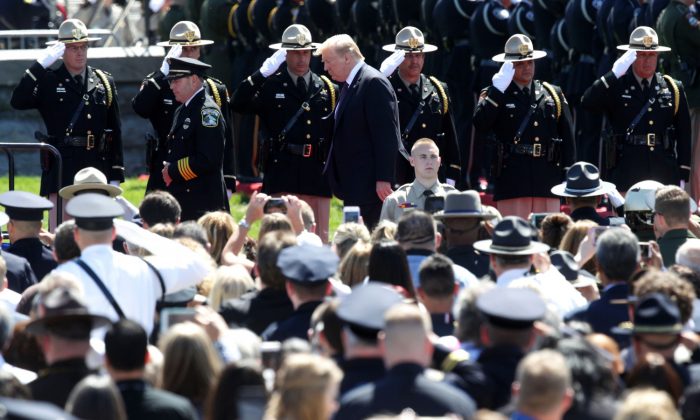 President Donald Trump arrives at the 38th Annual National Peace Officers’ Memorial Service at the west front of the Capitol in Washington on May 15, 2019. (Alex Wong/Getty Images)
Trump Administration

President Donald Trump said in remarks he delivered on May 15 that he believes people convicted of killing police officers should get the death penalty.

“The ambushes and attacks on our police must end, and they must end right now. We believe that criminals who murder police officers should immediately, with trial, get the death penalty—but quickly. The trial should go fast. It’s got to be fair, but it’s got to go fast,” Trump said.

The president first called for the death penalty during his campaign.

In a rally in New Hampshire, according to the Hill, he said: “One of the first things I’d do in terms of executive order, if I win, will be to sign a strong, strong statement that would go out to the country, out to the world, anybody killing a policeman, a policewoman, a police officer, anybody killing a police officer, the death penalty is going to happen.”

On Wednesday, the president noted that the number of officers killed in ambushes has decreased since he took office and seemed to connect it to the money he’s sent police departments for upgraded gear.

“I’m very proud to have sent to all of the police departments all over the country hundreds of millions—and even billions—of dollars’ worth of military equipment that wasn’t being used. Beautiful, wonderful, safe, great equipment that wasn’t being used. And other administrations didn’t want to send it. Someday, you’ll explain that one to me,” Trump said.

“But it’s been sent and it’s been used, and I’ve had so many people tell me how happy they were and how many lives it saved. We’ll never back down when it comes to protecting out police, ever. Ever.”

Trump then condemned people who use “hateful anti-police rhetoric” and said that “another dangerous trend” in recent years is prosecutors in some cities, such as Philadelphia and Chicago, deciding not to prosecute criminals who break the law.

“Last year, in Philadelphia, a robber shot and gravely injured a deli owner. He was a good man. He’ll never be the same. But he may serve—this criminal—a sentence that is very short. In fact, they’re looking at about three years, if you can believe this. Three years,” Trump said.

He then appeared to make a reference to “Empire” actor Jussie Smollett, who Chicago prosecutors inexplicably dropped 16 felony counts against after he allegedly faked a hate crime with the help of friends.

“Dangerous criminals must be punished to the fullest extent of the law. That’s the only language they understand. And those who file false police reports should face full legal consequences,” he said.

Trump highlighted the story of Ronil Singh, a police officer in California who police said was slaughtered by an illegal immigrant he’d pulled over.

“Corporal Singh headed out on duty—which he loved—to protect and to serve. You all know the story. Because hours later, he was gunned down and killed during a simple traffic stop. He was a vicious killer, this man that crossed into our country from the border just a little while before. A vicious killer that could’ve been kept out with border security, with the wall, with whatever the hell it takes,” Trump said.

“Could’ve been kept out. But we’re getting it there. We’re building the wall. We’re beefing up like you wouldn’t believe. The military has come into action. People are trying to come into our country illegally because our country is doing well. They can’t come in illegally. They have to come in through the legal system. They have to come in through merit. They can’t come in like this killer came in—just rode across the border, went through every sign he could go through.”

Trump invited Singh’s wife and brother up on stage, and Reggie Singh, the brother, expressed his support for the president.

“I actually want to thank you personally for—you’re the only one that actually reached out and said, gave your condolence to the family. And it actually means a lot to all of our law enforcement families that are here. For the sacrifice my husband and his brothers in blue, in blue, have given. So I want to thank you for that,” she said.

“And we all—every family sitting out here wants justice for what happened to their loved ones. And that’s what I want for my husband.”