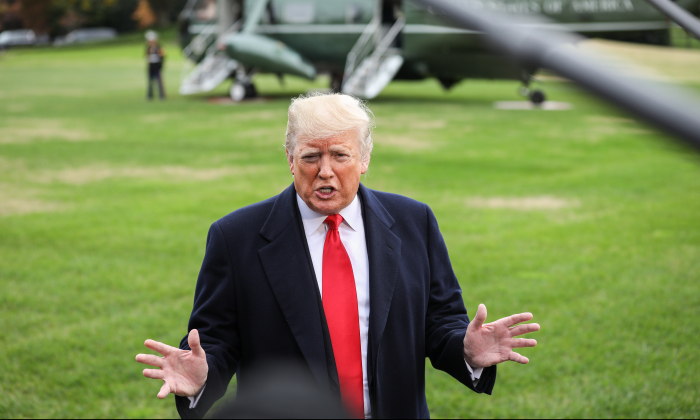 President Donald Trump speaks to the press on the South Lawn of the White House in Washington on Nov. 2, 2018. (Holly Kellum/NTD)
Trump Administration

President Donald Trump suggested on Nov. 15 that the inner workings of special counsel Robert Mueller’s team are a “total mess,” with investigators using threats to obtain the answers they need from witnesses.

While the president has been a frequent critic of the Mueller probe, his Nov. 15 statements are the first since asking Attorney General Jeff Sessions to resign and designating Sessions’s chief of staff, Matt Whitaker, as the acting attorney general.

“The inner workings of the Mueller investigation are a total mess. They have found no collusion and have gone absolutely nuts. They are screaming and shouting at people, horribly threatening them to come up with the answers they want,” Trump wrote on Twitter.

“They are a disgrace to our Nation and don’t care how many lives the ruin,” the president added. “These are Angry People, including the highly conflicted Bob Mueller, who worked for Obama for 8 years. They won’t even look at all of the bad acts and crimes on the other side. A TOTAL WITCH HUNT LIKE NO OTHER IN AMERICAN HISTORY!”

While the full scope of Mueller’s investigation remains classified, Attorney General Rod Rosenstein appointed him in May 2017 to investigate allegations of collusion between Trump campaign associates and Russia. Mueller reported to Rosenstein until Nov. 7, when Whitaker took over the probe.

Trump has adamantly maintained his innocence and has expressed frustration with the investigation. Mueller has not produced any evidence or indictments related to collusion. Rosenstein has noted that Mueller’s indictments of Russians do not include any allegations of collusion with U.S. citizens.

“Universities will someday study what highly conflicted (and NOT Senate approved) Bob Mueller and his gang of Democrat thugs have done to destroy people. Why is he protecting Crooked Hillary, Comey, McCabe, Lisa Page & her lover, Peter S, and all of his friends on the other side?” Trump wrote in another message.

“The only ‘Collusion’ is that of the Democrats with Russia and many others. Why didn’t the FBI take the Server from the DNC? They still don’t have it. Check out how biased Facebook, Google and Twitter are in favor of the Democrats. That’s the real Collusion!” the president added.

Democrats are concerned that Whitaker, who has previously expressed concern about the scope of the Mueller probe, may limit or end the Russia investigation.

“It’s been almost a week since we called on Matthew Whitaker to recuse himself from overseeing the Special Counsel Investigation. And, we have heard nothing but crickets from the DOJ Ethics Official,” Senate Minority Leader Chuck Schumer (D-N.Y.) wrote on Twitter.

Schumer is one of many Democrats demanding that Congress pass a law to protect the Mueller probe. Prominent Republican senators Chuck Grassley (R-Iowa) and Lyndsey Graham (R-S.C.) support the bill.