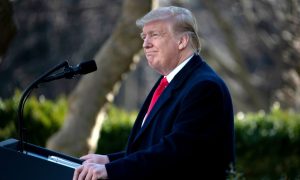 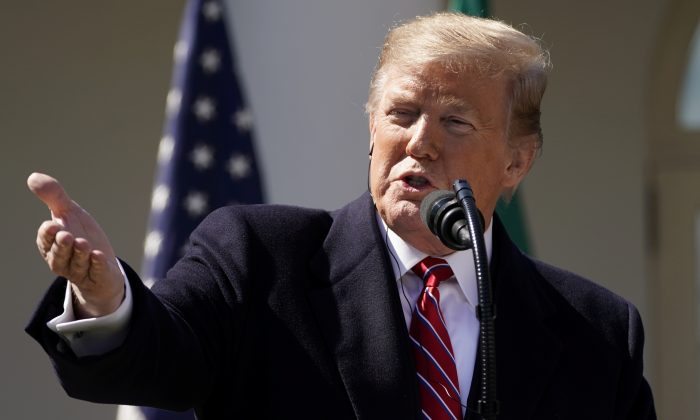 Trump Says Mueller Report Should Be Made Public

“Let it come out, let people see it,” Trump told reporters on his way to leave the White House for Ohio on March 20. “That’s up to the Attorney General … and we’ll see what happens.”

Special counsel Robert Mueller was appointed in May 2017 to investigate Russian interference in the 2016 election and allegations of collusion between the Trump campaign in such interference, as well as any matters that arose from the probe. The scope of the probe was provided by Deputy Attorney General Rod Rosenstein and was revised in August 2017, most of which remains heavily redacted (pdf). As a result, the full purpose of this memo remains unknown to the public .

Mueller has secured indictments against some two dozen Russians, who are unlikely to ever appear in court, for alleged election meddling and cyber intrusions. He also indicted several Trump campaign associates for process crimes or violations unrelated to the Russian interference. The collusion allegations remain unsubstantiated.

Several prominent prosecutors left Mueller’s office in recent months, hinting his final report is about to drop. Former-Acting Attorney General Matthew Whitaker said in on Jan. 28 he thought the probe is “close to being completed.”

Trump previously said he’d defer to the Attorney General to decide whether it will be released.

When asked on March 20 whether the American public has a right to see the report, Trump replied, “I don’t mind. I mean, frankly, I told the House, ‘if you want, let them see it.’”

‘Man to Write a Report’

Normally, a special counsel would be appointed by the Attorney General in cases where the Justice Department needs to ensure greater independence of the investigation.

Yet Mueller was appointed by Deputy Attorney General Rosenstein, who was only authorized to do so because then-Attorney General Jeff Sessions recused himself from the Russia investigation.

“A deputy, that’s appointed, appoints another man to write a report. I just won an election with 63 million votes or so. … and I’m saying to myself, ‘Wait a minute, I just won one of the greatest elections of all time in the history of this country … and now I have somebody writing a report that never got a vote—it’s called the Mueller report,” Trump said.

Still, the President said, he “look[s] forward to seeing the report.”

Opponents of the president have speculated that Trump obstructed the Russia investigation, though there’s no indication that any obstruction charges are forthcoming.

Trump has repeatedly slammed the Mueller probe as a “witch hunt.”

Wow! A Suffolk/USA Today Poll, just out, states, “50% of Americans AGREE that Robert Mueller’s investigation is a Witch Hunt.” @MSNBC Very few think it is legit! We will soon find out?

Of Mueller’s team, most worked at the Department of Justice or FBI headquarters during the Obama administration. At least 13 are registered Democrats, according to The Daily Caller. That’s why Trump dubbed the Mueller team “13 Angry Democrats.”

The Rigged Witch Hunt, headed by the 13 Angry Democrats (and now 4 more have been added, one who worked directly for Obama W.H.), seems intent on damaging the Republican Party’s chances in the November Election. This Democrat excuse for losing the ‘16 Election never ends!

At least two people were removed from or left the Mueller team due to bias against Trump in their internal communications. One was former FBI Deputy Assistant Director Peter Strzok and the other was identified by Rep. Mark Meadows (R-N.C.) as Kevin Clinesmith, an FBI attorney.

Trump’s new attorney general, William Barr, committed during his Jan. 15 confirmation hearing to releasing as much of the Mueller report as laws and regulations allow.

Barr said he was shocked to see the text messages between Strzok and Page. Upon a request from Justice Committee Chair Sen. Lindsey Graham (R-S.C.), he committed to find out if the FBI’s Russia investigation, which Mueller eventually took over, was conducted appropriately.

In 2016, the FBI obtained a FISA warrant to spy on Trump 2016 presidential campaign associate Carter Page, and in the warrant, the FBI used the Steele Dossier, a collection of unsubstantiated claims about Trump-Russia ties compiled by former British spy Christopher Steele, who was commissioned by the Democratic National Committee and the 2016 presidential campaign of former State Secretary Hillary Clinton.

Evidence has since emerged that officials were aware the dossier is unverified and its source politically biased.