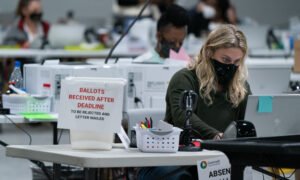 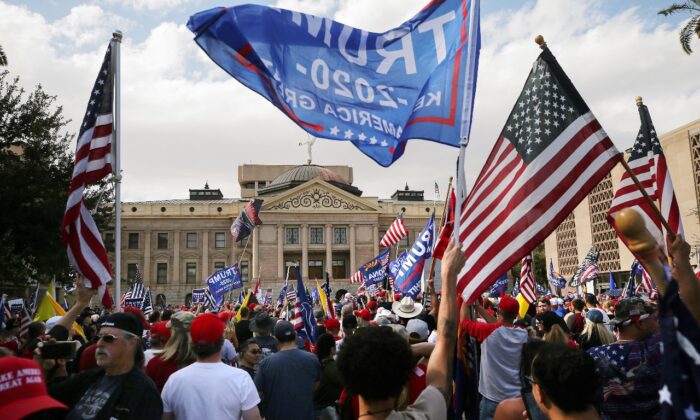 Supporters of President Donald Trump demonstrate at a ‘Stop the Steal’ rally in front of the State Capitol on Nov. 7, 2020 in Phoenix, Arizona. (Mario Tama/Getty Images)
Donald Trump

President Donald Trump said he might “stop by” a Washington rally on Saturday where thousands of people are expected to march in support of Trump and election integrity.

The “March for Trump” will start at noon at Freedom Plaza and end at the Supreme Court, as will simultaneous “Stop the Steal” rallies planned in all fifty state capitols. The peaceful rallies have sprouted up in various cities since Election Day amid concerns about potential abuses in the election process. They come as the Trump campaigns mount legal challenges in several battleground states.

“Heartwarming to see all of the tremendous support out there, especially the organic Rallies that are springing up all over the Country, including a big one on Saturday in D.C,” Trump said in a Friday tweet. “I may even try to stop by and say hello.”

Rally organizer Ali Alexander said the events are a grassroots effort, promoted by a coalition of about a hundred activists, influencers, and conservative groups, so people can show “support for President Trump and fair elections and transparent counting.”

“Hotels are sold out, plane tickets are way up. I’ll be happy if there’s 20,000 people,” he told The Epoch Times. “But these DC folks are telling me it might be way more than that.”

Alexander said the organizers have faced “enormous challenges” from censorship by social media platforms. Facebook last week took down a “Stop the Steal” group, saying its members made calls for violence and sought to delegitimize the election process. Eventbrite this week pulled the DC rally from its platform, citing misinformation. Twitter also censored the link to their website https://stopthesteal.us/, only to reverse the decision later, Alexander said.

“I think that the social media companies have become like a government force. They’re impeding our right to connect and communicate with each other to debate ideas, even bad ideas, in the marketplace of ideas,” he said. “This is very dangerous.”

“My message to build Silicon Valley is: Stop censoring us, or you’re going to get the outcome that all of us fear. I’m for peace; I fear the day when people have to go into dark alleys to whisper about dissenting thoughts from authority figures.”

But Alexander has not been cowed by these efforts to suppress the campaign’s message.

“I’m begging my government, give me an election, and audit the election so I can have confidence in it, no matter who won,” Alexander added.

“I don’t want CNN and Facebook to tell me who won. I want to know who really really won.”

With reporting by Emel Akan.