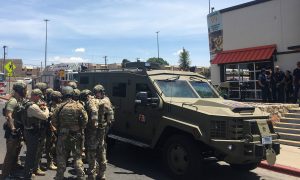 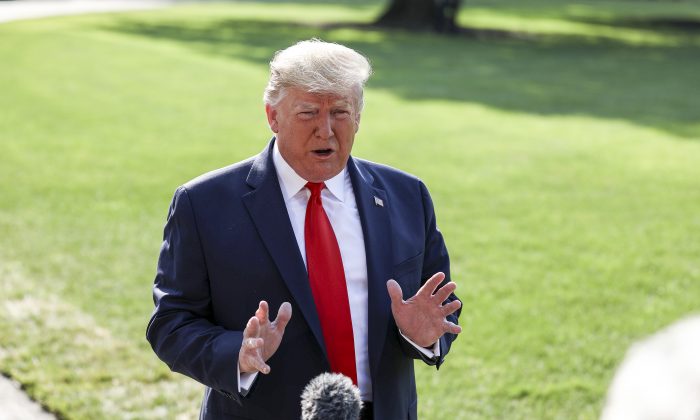 President Donald Trump said on Aug. 7 that mentally unstable people should not have guns.

A reporter noted that Trump banned bump stocks before asking if the president would consider a ban on large-capacity magazines.

“So, you have to have a political appetite within Congress,” Trump responded. “And, so far, I have not seen that. I mean, I can only do what I can do.”

“I think there’s a great appetite to do something with regard to making sure that mentally unstable, seriously ill people aren’t carrying guns. And I’ve never seen the appetite as strong as it is now. I have not seen it with regard to certain types of weapons.”

Trump noted that the alleged Dayton, Ohio, shooter appeared to support Sens. Bernie Sanders (I-Vt.) and Elizabeth Warren (D-Mass.) but said he doesn’t blame them for the shooting there.

“I don’t blame anybody. I blame—these are sick people. These are people that are really mentally ill, mentally disturbed. It’s a mental problem,” he told reporters outside the White House. ”

Trump suggested that he’s pushing congressional leaders to strengthen and expand background checks in an effort to keep guns out of the hands of “mentally unstable people or people with rage or hate—sick people.”

Trump a day prior said he supports so-called “red flag” laws, which enable the courts and law enforcement to take guns away from people who have not committed crimes, but said on Wednesday that he doesn’t think there’s a “political appetite” for a ban on assault weapons.

“There’s no political appetite, probably, from the standpoint of legislature. But I will certainly bring that up. I’ll bring that up as one of the points. There’s a great appetite—and I mean a very strong appetite—for background checks. And I think we can bring up background checks like we’ve never had before,” he said.

“I think both Republican and Democrat are getting close to a bill on—they’re doing something on background checks.”

Trump was departing Washington to visit El Paso, where a shooter gunned down 22 people and wounded dozens of others.

He was then set to fly to Dayton, where the shooter killed nine people and left many others wounded, according to authorities there.

Reporters tried seizing on Trump’s description of the flood of illegal immigrants over the border as “an invasion,” language the alleged El Paso gunman used in a manifesto explaining his motivations for carrying out the shooting. However, it’s not clear from the manifesto what the gunman’s political affiliation is, as he blames Republicans and Democrats.

The gunman also wrote that his opinions predated Trump’s campaign for president, saying he added that because “some people will blame the President or certain presidential candidates for the attack.”