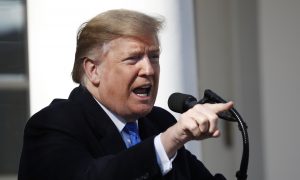 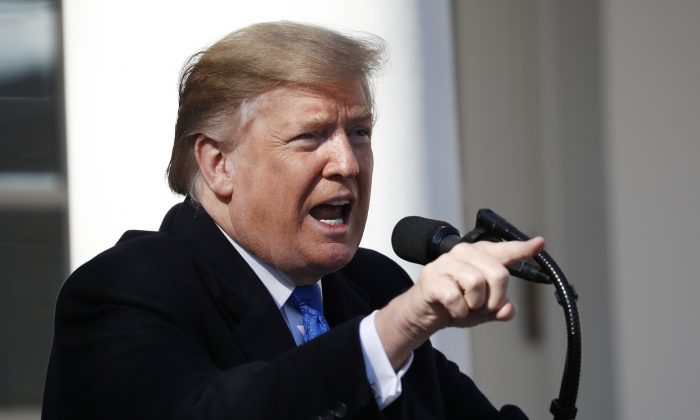 President Donald Trump speaks during an event in the Rose Garden at the White House to declare a national emergency in order to build a wall along the southern border in Washington on Feb. 15, 2019. (AP Photo/Pablo Martinez Monsivais)
Trump Administration

President Donald Trump slammed a lawsuit filed by 16 states, including California and New York, saying it was propelled mostly by radicals on the left.

“As I predicted, 16 states, led mostly by Open Border Democrats and the Radical Left, have filed a lawsuit in, of course, the 9th Circuit! California, the state that has wasted billions of dollars on their out of control Fast Train, with no hope of completion, seems in charge!” he said.

New California Gov. Gavin Newsom recently announced the cancellation of the train project, which ran into severe cost overruns, saying “there’s been too little oversight and not enough transparency.” The announcement prompted Trump to demand the return of $3.5 billion the federal government gave to California for the project.

Trump added on Tuesday, “The failed Fast Train project in California, where the cost overruns are becoming world record setting, is hundreds of times more expensive than the desperately needed Wall!”

As I predicted, 16 states, led mostly by Open Border Democrats and the Radical Left, have filed a lawsuit in, of course, the 9th Circuit! California, the state that has wasted billions of dollars on their out of control Fast Train, with no hope of completion, seems in charge!

The failed Fast Train project in California, where the cost overruns are becoming world record setting, is hundreds of times more expensive than the desperately needed Wall!

Trump asked Congress to approve $5.7 billion in funding for the border wall but the final appropriations only included about $1.3 billion, prompting him to declare a national emergency on Feb. 15.

The emergency declaration, combined with the spending bill, would give the administration $8 billion for the wall, the president said. That included $6.1 billion shifted from the military budget.

The president said in a press conference that drugs, gangs, and illegal aliens are pouring into the country, necessitating the need to declare a national emergency.

“We’re going to confront the national security crisis on our southern border and we’re going to do it one way or the other. We have to do it,” Trump said at the White House. “We have tremendous amounts of drugs flowing into our country, much of it coming from the southern border.”

He also said he knew legal challenges would be filed against his declaration but noted that even if lower courts ruled against him, the Supreme Court would uphold his authority.

Four environmentalist groups filed federal lawsuits to try to stop the declaration, including Public Citizen, a nonprofit founded by consumer advocate Ralph Nader, which filed a lawsuit on behalf of the Frontera Audubon Society of Weslaco, Texas, a nonprofit organization, and three Texas landowners.

The nonprofit claims in the legal complaint that its “members’ ability to observe wildlife will be impaired by the construction of a border wall and the resulting destruction of critical habitat.”

In addition, 16 states banded together to file another lawsuit in the Ninth Circuit Court over the national emergency declaration. The states asked the federal court to issue an injunction to prevent Trump from shifting the money to fund construction of the wall. Ultimately, the states’ representatives argued, the declaration should be declared illegal.

State of CA Et Al. vs Trump… by on Scribd

The states argued that “the federal government’s own data prove there is no national emergency at the southern border that warrants construction of a wall.”

According to federal data, tens of thousands of illegal immigrants flood across the border each month, posing a threat to national security, and the asylum processing system has been overwhelmed with thin claims that are mostly rejected in the end, leading the Trump administration to start making some asylum seekers wait in Mexico while their claims are processed.

The states also said in the lawsuit that the declaration, if it stands, would divert money from the states and “cause damage to their economies” and, in the case of California and New Mexico, would cause “irreparable environmental damage” to the states’ natural resources where the wall is built.