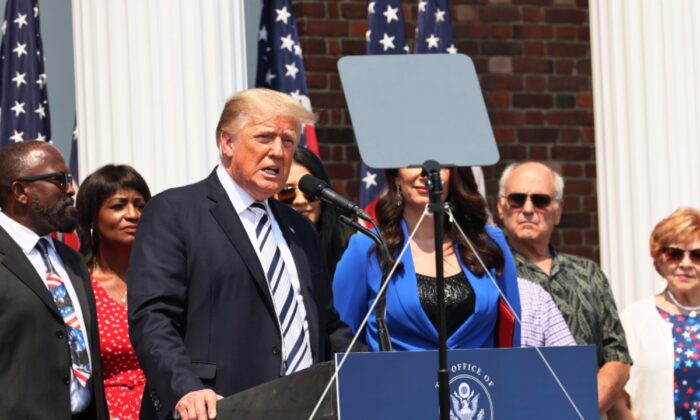 During a press conference on Wednesday when former President Donald Trump announced that he is filing lawsuits against Twitter, Facebook, and Google, he also discussed the Jan. 6 incident—in particular, Ashli Babbitt’s death.

When talking about the Capitol incident, Trump said he was surprised that his name was not mentioned in the Congressional report.

He also asserted that a lot of people involved with what he described as an “unfortunate event” are being treated unjustly and further noted that there exists a strong double standard.

“People are being treated unbelievably unfairly when you look at people in prison and nothing happens to Antifa. And they burned down cities and killed people.”

“Nobody knows who that man was,” Trump said of the officer who shot Babbit. “If that were the opposite way, that man would be all over, he would be the most well-known, and I believe I can say ‘man’ because I believe I know exactly who it is.”

“But, he would be the most well-known person in this country, in the world. But, the person that shot Ashli Babbitt, boom right through the head. Just, boom. There was no reason for that. And why isn’t that person being opened up and why isn’t that being studied?”

The former commander-in-chief then said that if the case were “the opposite,” then it would have been scrutinized for years and would have been a very ugly situation, but instead, “They’ve already written it off. They said, ‘That case is closed.'”

The Department of Justice earlier this year announced it closed an investigation into the officer-involved shooting of Babbitt and said it won’t pursue criminal charges against the officer.

“Officials examined video footage posted on social media, statements from the officer involved and other officers and witnesses to the events, physical evidence from the scene of the shooting, and the results of an autopsy,” according to the DOJ in an April news release. “Based on that investigation, officials determined that there is insufficient evidence to support a criminal prosecution.”

Mark Schamel, a lawyer representing the unnamed officer, previously told The Epoch Times that he “had to resort to deadly force” and “stopped the mob from breaking through and turning a horrific day in American history into something so much worse.”

Babbitt’s family has since promised to file a lawsuit over her death.

During the press conference, Trump argued that social media companies have “ceased to be private” companies and cited the Section 230 protection shield that such firms employ to protect themselves from liability. Republicans have argued that the federal rule has allowed big tech firms to censor their political opponents—while some have gone further, arguing that social media giants should be regulated as utilities.

“This lawsuit is just the beginning,” Trump said of the suits.