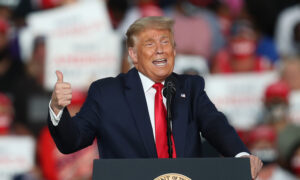 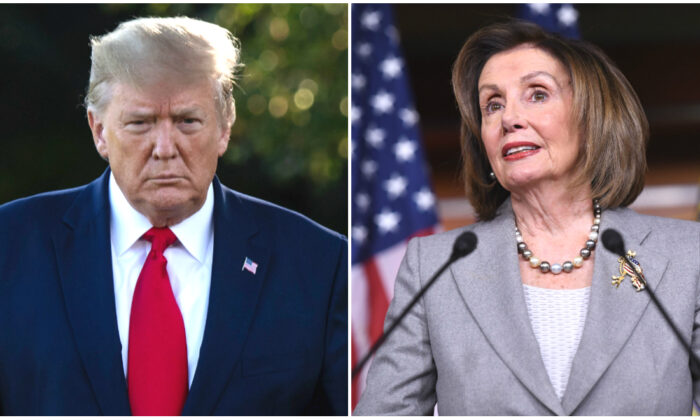 President Donald Trump said again on Oct. 15 that Congress should pass stimulus legislation in response to the CCP virus pandemic.

Speaker of the House “Nancy Pelosi couldn’t care less about the American People or the great American Worker. She should approve needed STIMULUS now,” Trump wrote on Twitter. “Most other Dems agree. Republicans are ready to go, I am ready to sign!!!”

In an interview with Fox News on Oct. 14, Trump said he wanted to pass a stimulus deal larger than the $1.8 trillion bill that the White House proposed last week. He said there’s a chance of the bill being passed before the November election.

Over the past several months, Trump and Pelosi have blamed one another for failing to come to an agreement on stimulus legislation amid the pandemic. Numerous governors and mayors have implemented shutdown orders in a bid to curb the spread of the disease, resulting in significant nationwide job losses.

Congress passed the CARES Act in March before it was signed into law, authorizing the distribution of stimulus payments, expanded unemployment benefits, and additional small business loans.

Democrats in the House passed two iterations of the HEROES Act, but Republicans and the Trump administration have said they were too expensive, that they’d essentially “bail out” Democratic municipalities, and that they contained too many unneeded provisions.

“Quite a few members feel this way,” Khanna told Roll Call, adding that at least 10 Democratic colleagues support the $1.8 trillion stimulus deal. “Now, I don’t know how many of them will be vocal, but members are hearing in their districts that people are suffering,” said Khanna, the vice-chair of Congressional Progressive Caucus. “We have a moral obligation to do something. We are the party that stands for the working poor.”

Treasury Secretary Steven Mnuchin on Oct. 14 said it’s unlikely that another virus relief bill will be passed before the election.

“I’d say at this point getting something done before the election and executing on that would be difficult,” he said at a news conference.

Pelosi said in an interview on Oct. 14 that the White House and Republicans aren’t taking the stimulus talks seriously.

“And what’s sad about it is, we could come [to an] agreement. We need to come to an agreement. You know this because you have been there,” she said. “They had in the CARES Act something they made everybody swallow, a big $150 billion tax giveaway to the wealthiest people in America. And yet when we want to make good on an expanded benefit for those who are unemployed, they say, ‘We can’t afford it.’”