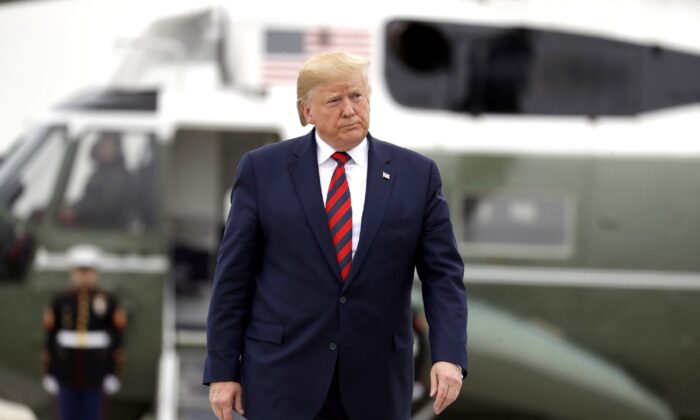 President Donald Trump told reporters on Friday morning that he isn’t concerned with the bevy of House Democrat-released transcripts and the forthcoming House’s public hearings on the impeachment inquiry.

“I’m not concerned about anything. The testimony has all been fine. I mean, for the most part, I never even heard of these people. I have no idea who they are,” he said to reporters. “It’s ‘Let’s find the 10 people that hate President Trump the most and let’s put them up there,'” Trump added.

Trump was referring to the State Department officials who testified in closed-door hearings.

In reference to the transcripts, the president told reporters before he left for Georgia: “No one seems to have any first-hand knowledge,” adding that “every one of those people canceled themselves out.”

“There are some very fine people. You have some Never Trumpers,” he also told the press.

In the same press conference, Trump said he is considering releasing a transcript of an April 2019 phone call between him and Ukrainian President Volodymyr Zelensky. He said he doesn’t mind that people read it because he wants to be transparent.

“I will give it if they want it, I’ll give it to them,” Trump told reporters before adding, “I don’t like doing it because it’s such a bad precedent.”

The phone call came about three months before the July 25 call that triggered the impeachment inquiry into his efforts to allegedly push Ukraine to investigate former Vice President Joe Biden’s and son Hunter Biden’s business dealings in the country.

His comments come as White House Chief of Staff Mick Mulvaney defied a House subpoena to appear before three committees leading the inquiry. He was called to testify in a closed-door meeting but didn’t show up at 9 a.m., according to news reports.

“Past Democrat and Republican administrations would not be inclined to permit senior advisers to the president to participate in such a ridiculous, partisan, illegitimate proceeding—and neither is this one,” White House deputy press secretary Hogan Gidley told reporters earlier this week, reported Fox News.

Schiff, Engel, and Maloney stated that Mulvaney was allegedly “directly involved in an effort orchestrated by President Trump, his personal agent Rudolph Giuliani, and others to withhold a coveted White House meeting and nearly $400 million in security assistance in order to pressure Ukrainian President Volodymyr Zelensky to pursue investigations that would benefit President Trump’s personal political interests, and jeopardized our national security in attempting to do so.”