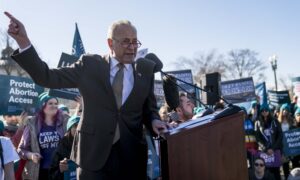 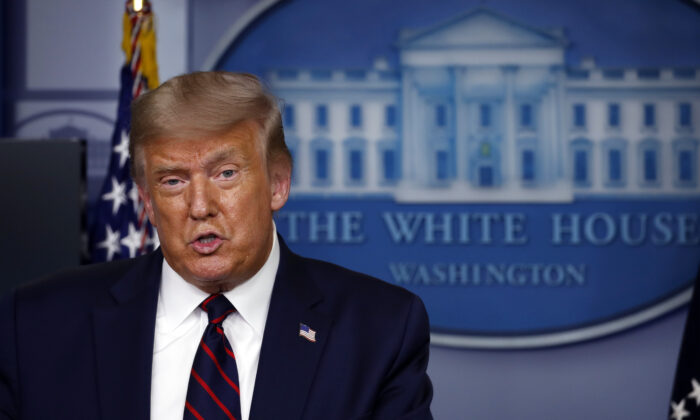 President Donald Trump speaks during a briefing with reporters in the James Brady Press Briefing Room of the White House in Washington on Aug. 4, 2020. (Alex Brandon/AP Photo)
Politics

President Donald Trump said on Tuesday that he would fill a vacancy on the Supreme Court should the opportunity present itself before the election.

“Absolutely, I’d do it,” Trump said on a radio interview on the Hugh Hewitt Show, when asked whether he would make a nomination to fill a vacancy on the nation’s top court during the last five months of his term.

“If you’re talking about if something would happen now, no, I would move quickly. Why not? I mean, they would. The Democrats would if they were in this position,” the president adding that he had someone in mind, but did not name the contender.

None of the Supreme Court justices have announced any intentions of retiring, but speculations of a possible vacancy have swirled in the public consciousness in recent weeks following news that liberal Justice Ruth Bader Ginsburg received treatment for her fifth bout of cancer. The 87-year-old justice has previously been treated for colorectal, pancreatic, and lung cancers, and has had other procedures earlier this year. But the liberal justice has been adamant that she would not retire.

“I have often said I would remain a member of the Court as long as I can do the job full steam. I remain fully able to do that,” she said in a statement in July.

Similarly last year, rumors that conservative Justice Clarence Thomas, the longest-tenured Associate Justice on the Court, might retire in order for Trump to nominate a like-minded, conservative justice. But he dispelled retirement speculations in several public comments he made in 2019.

“I’m not retiring,” Thomas said in response to a hypothetical question when giving a talk at Pepperdine University Law School.

The prospect of filling a Supreme Court vacancy ahead of the November election is likely to spark controversy in the Senate. Republicans in that chamber have been grappling with the question of whether to adhere to their own Garland standard, which Senate Leader Mitch McConnell (R-K.Y.) set in 2016. McConnell famously declined to hold hearings for President Barrack Obama’s Supreme Court nominee Merrick Garland to replace the late Justice Antonin Scalia 11 months before the election, saying the seat should be opened for the new president to fill.

At the time McConnell said it was a matter of principle, calling it the “Biden rule,” referring to a 1992 speech when then-Sen. Joe Biden argued that during a political season “action on a Supreme Court nomination must be put off until after the election campaign is over.”

However, McConnell drew outrage in 2019 when he appeared to soften on his stance, saying that he would fill the vacancy if one came up. Democrats quickly accused him of being hypocritical, but, a spokesperson for McConnell said at the time the Kentucky senator was consistent with his 2016 comments because he had said that vacancies that occur when the White House and Senate are held by different parties should not be acted upon.

“You’d have to go back to 1888 when Grover Cleveland was in the White House to find the last time a vacancy created in a presidential year was confirmed by the party opposite the occupant of the White House,” McConnell said in March 2016.

Trump and Senate Republicans have made significant efforts to change the composition of the judiciary, by nominating and confirming younger conservative judges, in order to shape the long-term direction of the country. This move has drawn criticism from progressives in the country. Since taking office, the Senate has confirmed 203 federal judges nominated by Trump, including 53 appellate judges, and two Supreme Court justices.