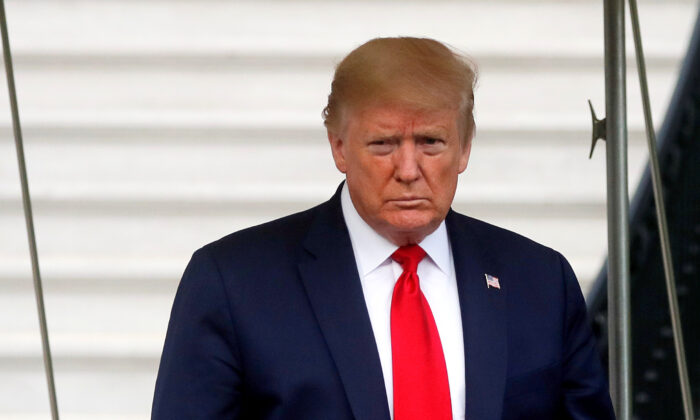 President Donald Trump departs on travel to the Camp David presidential retreat from the South Lawn at the White House, on May 1, 2020. (Carlos Barria/Reuters)
AMERICA

President Donald Trump said he wants to see some schools reopen this year and that he disagrees with one of his top pandemic advisers.

Trump, in an interview on May 14, responded to a statement made by top White House infectious disease expert Dr. Anthony Fauci about a possible spike in CCP virus cases during the reopening process.

Across the United States, governors ordered the closure of schools until the end of the academic year, and some even suggested that the next school term wouldn’t start in the fall.

Younger people are far less affected by the virus than older people or those with underlying health problems, the president noted.

“I think that we have to open our schools, young people are very little affected by this,” he said.

On May 13, Trump told reporters in a briefing that state governors will ultimately have to make a decision on the matter but said that the country won’t be coming back from the pandemic if schools stay closed down.

“I was surprised by his answer actually because it’s just to me it’s not an acceptable answer, especially when it comes to schools,” the president said.

Fauci on May 12 told lawmakers about the possibility of an outbreak in the fall, when college students are slated to start their terms. This is exacerbated by there being no form of treatment or vaccine for the disease, he said.

“If this were a situation where you had a vaccine, that would really be the end of the issue in a positive way. But as I mentioned in my opening remarks, even at the top speed we’re going, we don’t see a vaccine playing in the ability of individuals to get back to school this term,” Fauci said.

“The idea of having treatments available, or a vaccine, to facilitate the reentry of students into the fall term would be something of a bit of a bridge too far.”

Due to the uncertainty, the California State University system said it would move fall 2020 classes online, while New York Gov. Andrew Cuomo said he’s not sure when schools in that state will reopen.