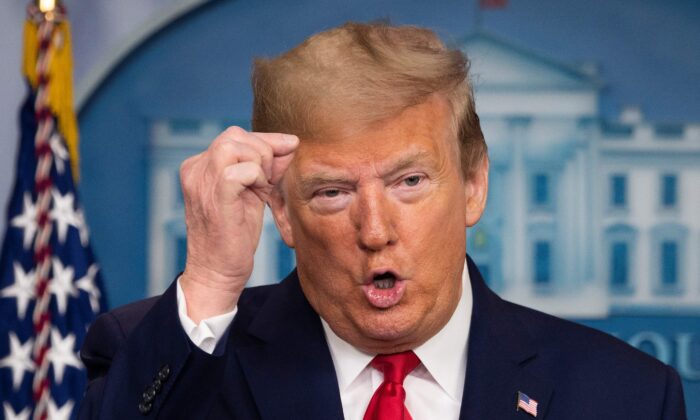 “I want him to do what he thinks is right, but I disagree with him on what he’s doing,” Trump said at a White House press briefing on Wednesday night. The decision by Kemp, which he announced this week, would violate federal guidelines that are in place, said Trump.

“I told the governor of Georgia, Brian Kemp, that I disagree strongly with his decision to open certain facilities,” Trump added.

Kemp, like numerous other governors, issued a statewide stay-at-home order in a move to curb the spread of the CCP (Chinese Communist Party) virus, a novel coronavirus that emerged in Wuhan, China, in 2019.

Kemp wrote on social media after the president’s comments that he appreciated the president’s “bold leadership and insight during these difficult times,” but he stressed that the move to reopen the economy is correct.

“Our next measured step is driven by data and guided by state public health officials. We will continue with this approach to protect the lives—and livelihoods—of all Georgians,” the governor added.

Under his order, theaters, restaurants, and clubs can reopen along with hair salons and bowling alleys on Friday. People have to adhere to social distancing guidelines.

Bars and nightclubs will stay closed, and Georgia’s shelter-in-place order expires on April 30.

Florida Gov. Ron DeSantis, meanwhile, said earlier in the day that his state and five others will coordinate reopening their economies.

“We have had a meeting with all the Southeastern governors—Mississippi, Alabama, Georgia, Florida, South Carolina, and Tennessee,” DeSantis told Fox News. “And we shared a lot of ideas. I think we will be on the same page on some stuff.”