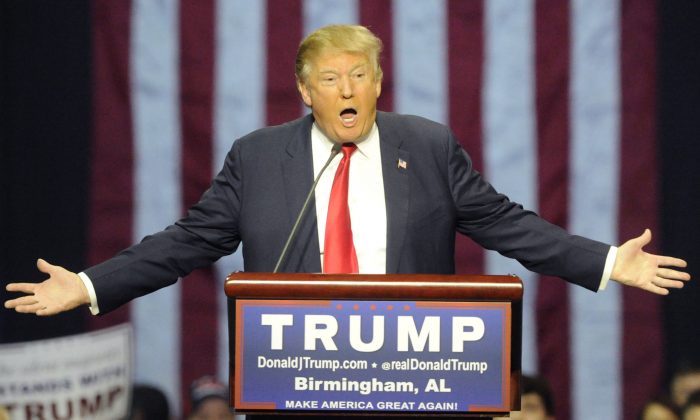 Trump first told the story Saturday at a rally in Birmingham, Alabama, as he pressed the need for greater surveillance, including monitoring certain mosques, in the wake of the Paris attacks.

Trump repeated the assertion Sunday in an interview with George Stephanopoulos on ABC’s “This Week,” as Stephanopoulos explained to Trump that police had refuted any such rumors at the time.

“There were people that were cheering on the other side of New Jersey, where you have large Arab populations. They were cheering as the World Trade Center came down,” he said.

“I know it might be not politically correct for you to talk about it,” he added, “but there were people cheering as that building came down, as those buildings came down. And that tells you something.”

A spokeswoman did not respond to a request for clarification Saturday about Trump’s comments.

In a statement, Jersey City Mayor Fulop criticized Trump for his statements.

“Trump is plain wrong, and he is shamefully politicizing an emotionally charged issue,” said Fulop. “No one inJersey City cheered on September 11th. We were actually among the first to provide responders to help in lower Manhattan.”

Footage of Muslims in Middle Eastern countries cheering news of the attacks were broadcast often on television, but there is no evidence in news archives of mass celebrations by Muslims in Jersey City, which sits right across the Hudson River from Lower Manhattan, with clear views of the World Trade Center site.

While rumors have circulated on the internet for years that American Muslims celebrated the attacks in Paterson, New Jersey, police officials and religious leaders denied it at the time.

“Trump needs to understand that Jersey City will not be part of his hate campaign,” said Fulop. “Clearly,Trump has memory issues or willfully distorts the truth, either of which should be concerning for the Republican Party.'”

George Pataki, the governor of New York at the time of the attacks who is also running for the Republican presidential nomination, responded on Twitter.

“Not sure what luxury spider-hole @realDonaldTrump was hiding in on Sept11 but I saw Americans come together that day @GStephanopoulos,” he wrote.