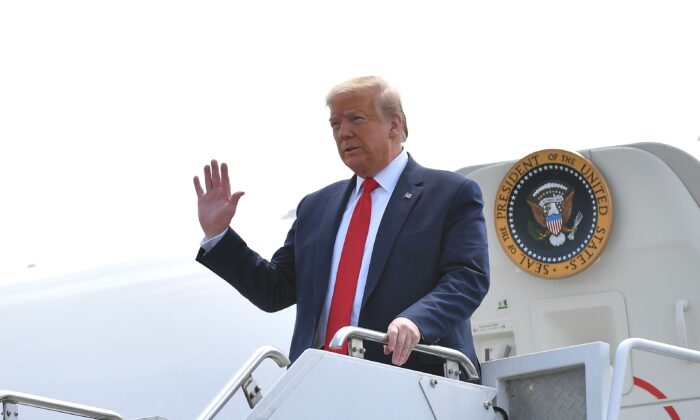 President Donald Trump steps off Air Force One upon arrival at Lehigh Valley International Airport in Allentown, Pa., on May 14, 2020. (Mandel Ngan/AFP via Getty Images)
AMERICA

Trump Says He Lost 5 People He Knew to COVID-19, Including 2 Close Friends

President Donald Trump said on Thursday that he knows five people, including two close friends, who have died from COVID-19.

While speaking to workers in Allentown, Pennsylvania, the president used his personal experience to contrast the CCP (Chinese Communist Party) virus and influenza.

“You can say what you want about the flu, but I’ve never lost anybody that I know to the flu,” Trump remarked, adding that “nobody ever said they died.”

“But I’ve lost five people that I know,” he said. “Two people were very good friends.”

These people, who he described as friends, were “older,” and he wouldn’t describe them as being “in the greatest of health.”

“I wouldn’t say their weight was perfect. Not perfect. But they’re gone,” Trump told workers. “It’s just a terrible, terrible thing,” he added.

Last month, the president said he lost four friends to the CCP virus, a novel coronavirus that emerged in China last year, including a close one.

Trump also called on Pennsylvania Gov. Tom Wolf to reopen the state faster amid the pandemic.

“We have to get your governor of Pennsylvania to start opening up a little bit here,” Trump added. “You have areas of Pennsylvania that are barely affected, and they want to keep them closed. Can’t do that.”

According to PennLive, 24 counties in Pennsylvania are in the yellow phase of the state’s reopening plan, while 13 more are slated to reopen on Friday.

“You’re going to be a nation of manufactures, and Pennsylvania workers will once again, you’re going to lead the way. With your help, we will vanquish the virus. We’ll get our nation back to work, and we will build our glorious future with American hands, and American grit, and American pride,” the president also said, adding that supply chains will be reinforced.

The United States will be prepared for future pandemics by replenishing the national stockpile and bringing manufacturing of critical supplies and equipment back to the country.

“Wouldn’t that be nice?” Trump asked. “My goal is to produce everything America needs for ourselves and then export to the world, including medicines.”

Trump also toured the Owens & Minor Inc. distribution center, which the White House said has sent millions of N95 masks, surgical gowns, and gloves to hospitals and surgery centers across the United States. He went through the mask distribution center in the political swing state of Pennsylvania in an effort to highlight his administration’s efforts to fight the coronavirus.