Trump Says He Has Doubts About China’s Official Virus Data 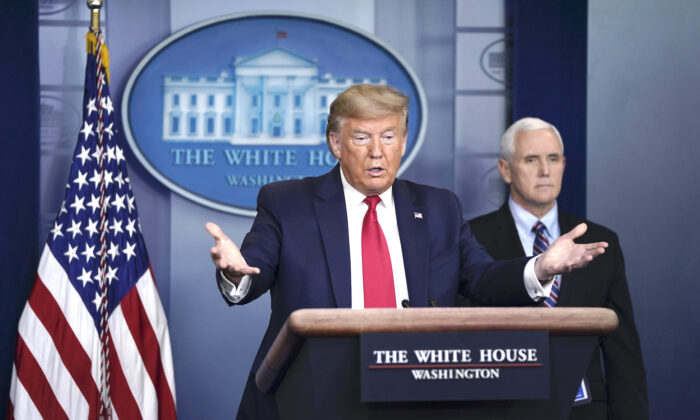 President Donald Trump and Vice President Mike Pence at a briefing on the CCP virus pandemic in the press briefing room of the White House in Washington, on March 26, 2020. (Drew Angerer/Getty Images)
By Mimi Nguyen Ly

President Donald Trump on Thursday expressed his doubts about the number of COVID-19 cases being reported by the Chinese Communist Party’s (CCP) in its official data that is quoted around the world.

A tracking map published by Johns Hopkins University currently shows that the United States has 83,507 confirmed cases, compared to China which has an official confirmed case total of 81,782.

He said that he and Chinese leader Xi Jinping were scheduled to talk by phone on Thursday night.

A series of internal government documents obtained by The Epoch Times show that the situation in the city of Wuhan, the ground zero of China’s epidemic, is much worse than what has been officially reported. The documents include statistical data sheets on March 14 about diagnostic test results in Wuhan from the Wuhan Municipal Health Commission. In one example, the real number of new cases of infection in Wuhan is over 20 times more than the official numbers.

Authorities in Beijing also announced on March 19 that the number of Chinese cellphone users had dropped by 21 million over the past three months, without explaining the cause of the drop. The Epoch Times noted in a previous report that cellphones are an indispensable part of life in China and that deaths due to the CCP virus may have contributed some of to the closed accounts.

The number of COVID-19 cases continues to rise in the United States as testing and access to it improves, and as testing centers work to clear a backlog of samples.

On Tuesday, White House Coronavirus Task Force Coordinator Dr. Deborah Birx said that the United States had now conducted more testing in the prior eight days than South Korea had in eight weeks. At the time, she said the United States was doing about 50,000 to 70,000 tests a day.

At the time, Birx said during a virtual town hall on Fox News that South Korea, which has a population of 51.4 million, tested about 290,000 people. The United States, she said, which has about 372 million residents, has done over 300,000 tests.

The American Enterprise Institute started a tracker of America’s testing capacity, which is projecting that the United States will conduct 100,000 or more COVID-19 tests per day by March 27.

The Coronavirus Task Force is urging all Americans to adhere to the “15 Days to Slow the Spread” campaign to urgently reduce the spread of the virus. Trump said on Tuesday that his administration will assess recommendations surrounding business activity after the 15 days of recommended social distancing measures.