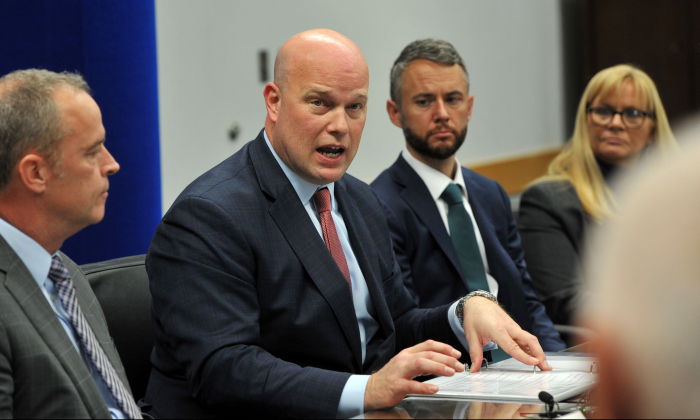 President Donald Trump said he was not aware of Acting Attorney General Matt Whitaker’s views on the Russia investigation before appointing him to temporarily replace Attorney General Jeff Sessions.

In a taped interview that aired on Fox News on Nov. 18, the president said Whitaker is free to decide how to handle the probe and that he would not get involved if the acting attorney general moved to limit the investigation by special counsel Robert Mueller.

Whitaker has been the target of criticism by Democrats who believe that his thoughts on the Mueller probe may result in actions to limit or shut down the investigation. Mueller was appointed by Sessions in May last year to investigate allegations of collusion between the Trump campaign and Russia, as well as matters that arose from the probe.

Whitaker has previously criticized the scope of Mueller’s investigation, ruled out that there was any collusion, and opined about a scenario in which a new attorney general reins in the probe by shrinking Mueller’s budget.

Asked if learning of Whitaker’s views had any impact on his appointment, the president said he doesn’t think so.

“I don’t think it had any effect. If you look at those statements, those statements really could be viewed either way,” Trump said. “What do you do when a person is right? There is no collusion. It happened to be right.”

Mueller has not brought any charges of collusion. Rosenstein, who Mueller answers to, has on several occasions clarified that the charges brought by Mueller do not implicate any U.S. person in colluding with Russia.

Trump said he would not overrule Whitaker if the acting attorney general moved to limit or close down Mueller’s probe. Referring to people who are afraid he will close down the investigation, the president pointed out that he has been under investigation since announcing his run for president in 2015.

Trump said that then-FBI officials Andrew McCabe, Peter Strzok, and Lisa Page wanted to set up an “insurance policy” in the event Trump won the election. Mueller’s investigation is that policy in action, the president suggested.

“These people were looking at me. They wanted an insurance policy just in case I won or Hillary lost,” Trump said. “This was the insurance policy. It’s a scam. There was no collusion whatsoever and the whole thing is a scam.”

Trump also indicated that the Mueller probe is nearing its completion. The president said he personally answered a set of questions from the special counsel related to collusion. Trump declined to answer questions related to obstruction of justice.

“Probably this is the end,” Trump said.

Rosenstein appointed Mueller because Sessions recused himself from the Russia investigation. The recusal upset Trump, but Sessions served for nearly two years before the president asked him to resign. Mueller is now reporting to Whitaker instead of Rosenstein.

Much of the Mueller investigation, including its full scope, is classified. Rosenstein defined the limits of the investigation in a pair of memos, the second of which, issued on Aug. 2, 2017, is heavily redacted.

Whitaker expressed his views on the Mueller investigation in an op-ed for CNN published on Aug. 6, 2017. Whitaker wrote that Mueller was close to crossing a red line by investigating the finances of Trump and his family.

“It is time for Rosenstein, who is the acting attorney general for the purposes of this investigation, to order Mueller to limit the scope of his investigation to the four corners of the order appointing him special counsel,” Whitaker wrote at the time.

In addition to calls for Whitaker’s recusal, Democrats have challenged the legality of his appointment, arguing that Trump may have violated the constitution by appointing someone who had not been vetted by the Senate. The state of Maryland filed a lawsuit against the U.S. government over the designation, citing a myriad of legal issues.

The Department of Justice responded to the lawsuit by issuing an extensive legal opinion to the White House concluding that Trump was within his authority when he appointed Whitaker.