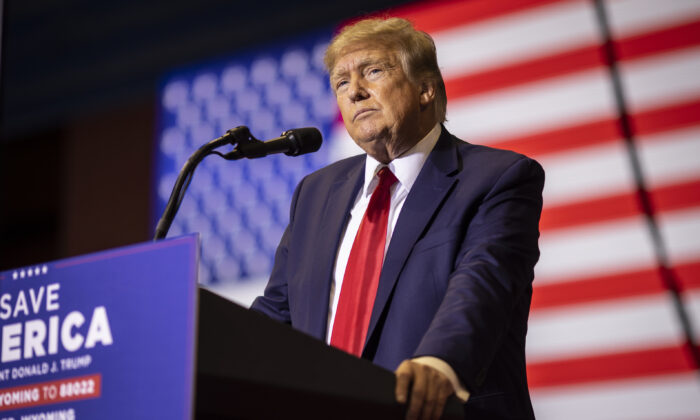 Former President Donald Trump on Thursday posted on social media that he declassified materials in late 2020 relating to the FBI’s controversial Crossfire Hurricane investigation into his 2016 campaign.

The former president noted in two Truth Social posts that in October 2020, he wrote on his now-deleted Twitter account, “I have fully authorized the total Declassification of any & all documents pertaining to the single greatest political CRIME in American History, the Russia Hoax,” adding, “Likewise, the Hillary Clinton Email Scandal. No redactions!”

Trump on Thursday also made reference to a memorandum issued on Jan. 19, 2021—a day before President Joe Biden’s inauguration—to declassify “certain materials” relating to the Crossfire Hurricane investigation, which was launched in July 2016 to investigate claims of Russian interference in the election. Years later, special counsel Robert Mueller concluded that the investigation found no evidence showing Trump or his campaign coordinated with Moscow to sway the election.

It was later revealed that Crossfire Hurricane was based partially on a series of notes and memos concocted by former UK spy Christopher Steele—known as the “Steele dossier”—while he was performing opposition research for a third party on behalf of the Clinton presidential campaign and Democrats. A number of allegations in his dossier have since been discredited by federal law enforcement officials.

It’s not exactly clear why Trump posted about his memo to declassify some documents relating to the Crossfire Hurricane investigation.

Both the Department of Justice and FBI have issued few comments about the raid since it was carried out, with Attorney General Merrick Garland confirming last week that he personally authorized seeking a warrant in the case.

Last week, the judge who approved the FBI search warrant of Trump’s Mar-a-Lago unsealed the warrant and property receipt, showing agents recovered alleged classified and top-secret documents, although no information has been provided about them so far by either Trump’s team or the federal government.

Lawyers for Trump and Republicans have called for the Justice Department’s affidavit seeking the FBI search warrant to be unsealed. The move would reveal the federal agency’s justification to carry out the raid and what FBI agents were searching for at Mar-a-Lago.

“I determined that the materials in [a Crossfire Hurricane] binder should be declassified to the maximum extent possible. In response, and as part of the iterative process of the declassification review, under a cover letter dated January 17, 2021, the Federal Bureau of Investigation noted its continuing objection to any further declassification of the materials in the binder,” Trump wrote in January 2021.

He then added at the time: “I hereby declassify the remaining materials in the binder. This is my final determination under the declassification review and I have directed the Attorney General to implement the redactions proposed in the FBI’s January 17 submission and return to the White House an appropriately redacted copy.”

Months before that memo was issued, on Twitter, Trump wrote that “all Russia hoax scandal information” was declassified by him “long ago.”

Also Thursday, Trump denied anonymously sourced claims that he is struggling to add lawyers to his team amid a legal battle with the Department of Justice and FBI following last week’s raid on his Mar-a-Lago property.